You are here: Home / Science / New Images Present Details On Uranus, Its Rings, And Auroras 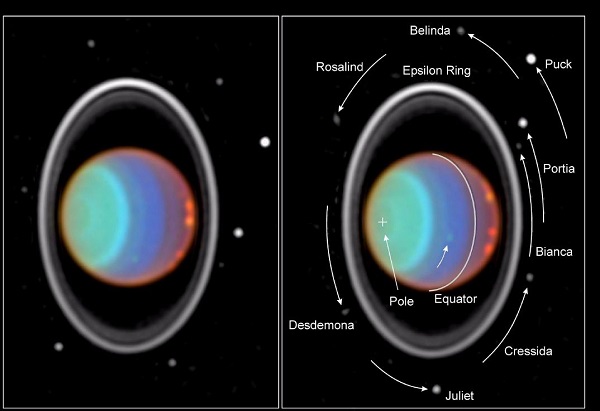 NASA recently released two new stunning composite images showcasing Uranus, it rings, and its auroras. These photos were created by combining observations gathered by the Voyager 2 spacecraft as well as the Hubble Space Telescope.

Besides, offering these new photos to the public, the aerospace agency also offered information about the seventh planet from the Sun and its planetary system. More exactly, it offered data on its rings and auroras.

NASA’s statement pointed out the following: “Auroras are caused by streams of charged particles like electrons that come from various origins […].”

These origins can include anything from the planetary ionosphere to solar winds and moon volcanism. The charged particles could have gotten caught in powerful magnetic fields. Then, they could have gotten channeled in the upper atmosphere. There, they can interact with various gas particles such as nitrogen or oxygen. Such an event could set off these spectacular bursts of light.

Except for Mercury, every planet in our Solar System has its own set of auroras. However, each of them has its unique set of properties which continue to fascinate. The Voyager 2 was the first to detect Uranus’s auroras. It did so as it was sweeping by the planet sometime in 1986. It was part of what would come to be called its Grand Tour which targeted the outer solar system.

The Hubble Space Telescope also managed to capture such images back in 2011, and it was also the first Earth-based telescope to achieve this feat. However, Uranus’s auroras are still far from being well studied.

A team of astronomers from the Paris Observatory took a closer look at them in both 2012 and 2014. They based their studies on observations gathered by the STIS or the Space Telescope Imaging Spectrograph installed on the Hubble.