You are here: Home / Science / NASA Spotted A New Water Plume On The Europa Moon 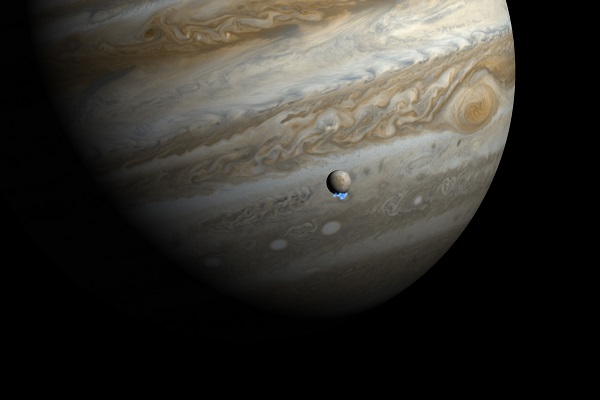 For the second time in just a few years, NASA’s Hubble Space Telescope has detected what scientists believe to be a giant water plume ejecting from the frozen surface of Jupiter’s moon Europa. This second plume is smaller than the one detected by Hubble in March 2014. However, it does lead scientists to believe their speculation about data collected during the first eruption were correct.

Scientists used what is called the “transit technique” to detect a giant water plume. Several teams have used Hubble to do this. As it is, the two plumes detected on Europa were found by two different teams. Basically, Hubble is used in detecting a decrease in radiation emitted from Jupiter as Europa moves between the gas giant and Earth. When a plume erupts, it further distorts that radiation signature.

For years, astronomers have speculated about the potential for a liquid water ocean underneath Europa’s icy surface. This liquid zone would be kept from freezing by the internal geothermal heat created by Europa’s core, and the torsion caused by its parent, the gas giant, Jupiter.

These plumes are evidence that, from time to time, this liquid layer erupts through the frozen crust in giant plumes that shoot into space. Hubble has now twice detected evidence that scientists believe prove these plumes exist. Therefore, so could the liquid layer of water.

“It’s not completely unequivocal, but in my mind, the pendulum has swung from caution to optimism.”

This is according to the lead scientist William Sparks of the Space Telescope Science Institute in Baltimore. He also stated that, as the event repeated itself, it couldn’t have happened just by chance. At least not according to “a formal statistical sense”.

What really makes this discovery important is the fact that liquid water is considered one of the key ingredients to life in the universe, as is the very geothermal energy that drives the plume eruptions.