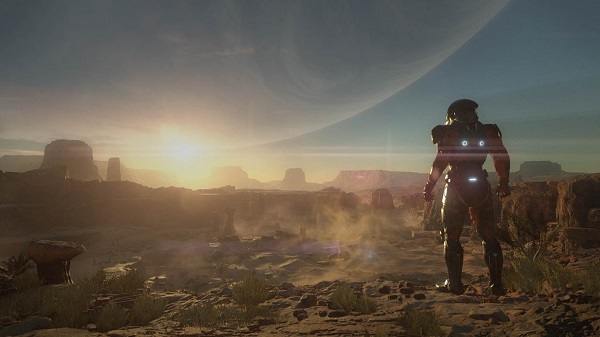 The anticipation for Bioware’s upcoming RPG, Mass Effect: Andromeda is palpable for numerous gamers with only a few weeks to wait. However, the developers seem keen on keeping us engaged until then by releasing a number of trailers detailing the many features of the game. The latest such trailer involved the exploration aspect of the new game.

The trailer emphasizes the fact that throughout our search for humanity’s new world, we will encounter over 100 planets in the Helius cluster of Andromeda. However, before you start imagining the endless time spent within the game, Bioware has revealed that we will only be able to land on a handful of planets.

Nonetheless, each of the explorable planets will feature their own unique storyline, characters, and challenges independent of the main storyline. Furthermore, each planet will very likely provide different environments for us to explore and conditions to which we need to adapt. The Nomad will be your main vehicle for planetary exploration.

As you discover important landmarks on each planet you will be able to establish a small outpost by deploying a forward station which will provide you with various benefits like protection against environmental conditions, resupply, changing your loadout, and recall your Nomad in case it gets lost or destroyed.

The trailer focuses on one planet, Elaaden, a hot and desert-like planet, where we can help a Krogan outpost. Depending on our choices, the player will be able to build their own outpost as it progresses through the story and challenges of the planet, gradually increases its viability. This system is the main way to upgrade your central hub in Andromeda, the Nexus, as well as gradually wake up more colonist from cryo-sleep. Depending on the specialization of the colonists you want to wake up, you will be provided with benefits to technology research and development, combat or in commerce.

Exploration between planets will take place on board the Tempest, where you will be able to choose your destination from the main map interface. However, Bioware has decided to make the environments outside of your ship visible which is an amazing touch.

What do you think about the exploration elements of Mass Effect: Andromeda?