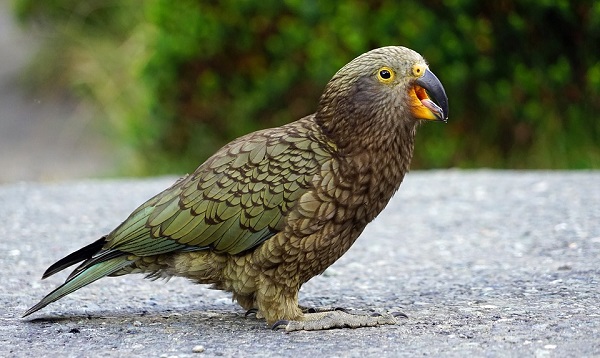 Kea parrots are the only birds known to respond to laughter. The playful New Zealand birds are known to engage in spontaneous playing sessions, emitting a loud, laughter-like noise while doing so.

In the wild, when the birds are in a playful mood, they engage in acrobatic loops, toss various small objects at each other, and give themselves high-fives. Researchers who have studied the inner relations of the Kea parrots noticed that the behavior is usually contagious.

Even more, the play sessions usually end as abruptly as they begin. The parrots go back to their previous actions without hesitations when the laughter starts to fade away.

An Offer They Cannot Refuse

The Kea parrots’ playfulness was not new for the researchers, but their laughter-like call is. During a recent study conducted in the Pass National Park in New Zealand, researchers discovered that the cry bares similarities with contagious laughter in humans, the parrots responding almost immediately to the call to play.

In order to assess the degree in which the call modifies the temporary behavior of the birds, researchers conducted a series of experiments. They played a variety of sounds in areas with a dense population of Kea parrots, and recorded their reactions five minutes before, during, and five minutes after they heard the sounds.

When the birds heard the chuckle-like noise, they almost immediately began to play with one another, high-fiving, looping, and throwing small pieces of fruit at the nearest specimen, while also emitting the call themselves. As soon as the researchers stopped the recording, the spirits calmed down, and the birds started minding their business.

The Kea parrots did not engage in any playful activity when they were played other noises such as a bland tone, a robin’s alarm call, or other screech-like noises emitted by the Kea. This lead the team to believe that the call triggers a contagion effect, similar to those observed in humans, chimpanzees, and rats.

Emotionally Contagious Behavior Is a Sign of Emotional Intelligence

Until recently, scientists believed that only a handful of species were sufficiently developed to show strong emotional responses to cooperative activities. Contagious laughter or the excitement of small children playing and laughing were only observed in chimpanzees and rats.

Now, using this new pieces of evidence, researchers are looking at other animals that have shown signs of behavioral contagion. Dogs, for example, are known to gleefully participate in play sessions. Ferrets and cats are also prone to contagious behavior, but further studies are needed before scientists emit a hypothesis.