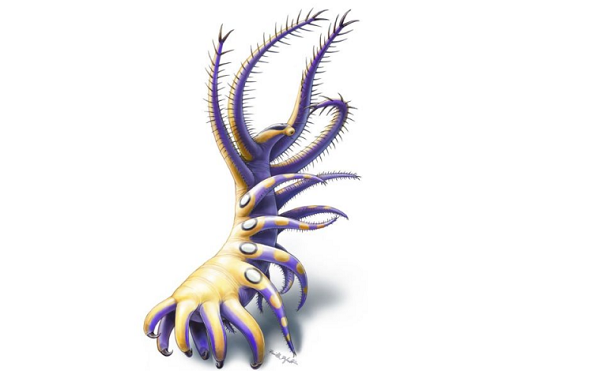 Scientists discovered a strange sea creature similar to a worm.

Throughout the long history of Earth, life has taken many forms, some stranger than others. However, one of the most recent discoveries of a sea creature which lived around 500 million years ago is among the most unusual ones you will see.

Researchers have discovered the fossilized remains of a lobopodian which is around 500 million years old while digging the Burgess Shale of British Columbia. The newly discovered sea creature has been named Ovatiovermis cribratus, and it resembles a worm, a few inches tall which had around 30 large limbs.

Scientists believe that their discovery is one of the earliest known species of arthropods ever found in the fossil record, due to its extreme age and unique appearance and physical characteristics. Arthropods is a group of animals which includes spiders, insects, crustaceans, and even scorpions.

Scientists estimate that the strange sea creature lived in the early Cambrian period. It shares most of the same features are previously discovered lobopodians which have worm-like bodies as well as stubby legs. They also have between 20 and 30 limbs. However, what makes this discovery unique is the absence of defensive spikes.

The fossils of the alien-like creature were analyzed by the Jean-Bernand Caron and Cedric Aria, researchers at the Royal Ontario Museum. The pair of discovered fossils allowed the scientists to extensively document the body of the sea creature. They found that the top half features slender and long legs equipped with rows of bristles, while the bottom half was thicker and robust.

The researchers believe that the worm was a filter-feeder meaning that it anchored itself to the seafloor with its hooks located at the end of the lower-end limbs and began combining for food with its frontal limbs.

The discovery of the O. cribratus sea creature allows researchers a better understanding of the evolution and changes suffered by arthropods and their early ancestors, the lobopodians. Out of all known fossils and species, this worm is the earliest and most primitive member of this specific group of animals.

Thanks to this discovery, scientists can now claim that panarthropods evolved from a common filter-feeding ancestor much like this worm.

What do you think about this discovery?