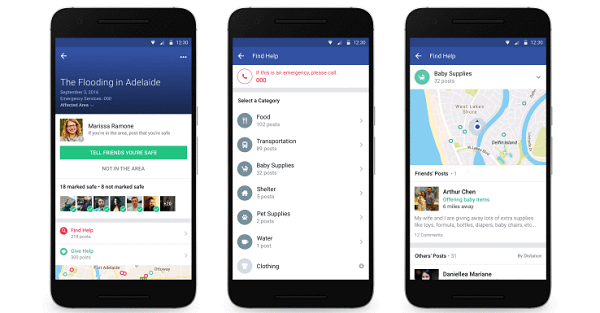 In times of a crisis, either a natural disaster or a terrorist attack, Facebook users were able to check in on Facebook and declare that they are safe for all their friends to know. The feature provides a slight measure of relief in cases where you can’t always reach your loved ones.

Now, Facebook has expanded on that basic function by developing a new feature called Community Help. Users can now access a new page on the Safety Check tab, which allows people from an area near the disaster zone to offer various type of assistance to those involved.

Facebook users are free to offer whatever they can, from basic supplies like food and water and other essential, to even accommodations. Victims of a disaster can browse through the Community Help page’s categorized posts. Once they found the post of a person offering something they need, they can contact them over Facebook Messenger.

The Safety Check feature was initially launched in 2014 and saw wide used during the 2015 Paris attacks when around 4 million people used it to mark themselves safe. Currently, the new Community Help feature is only available in the US, Canada, New Zealand, India, Australia, and Saudi Arabia. At the moment, the feature applies only for accidental and natural disasters, but after a few weeks of testing, Facebook plans to release it for the entire world as well as for man-made disasters.

The idea of the Safety Check came to Facebook after it saw that many users in Japan used the social network to tell their contacts that they are safe. After that disaster, Facebook developed the Disaster Message Board, which became the Safety Check after the 2013 Boston Marathon. However, the feature wasn’t automated at first, as developers needed to select those who could use it.

Now, the Safety Check feature is almost completely automated. Facebook developers are only overseeing the use of the feature to ensure the quality of the service. It also prevents fake news from triggering the safety check feature, by analyzing the numbers of posts regarding a certain situation in an area, as well as confirming them with reports from news agencies.

What do you think about the new feature?