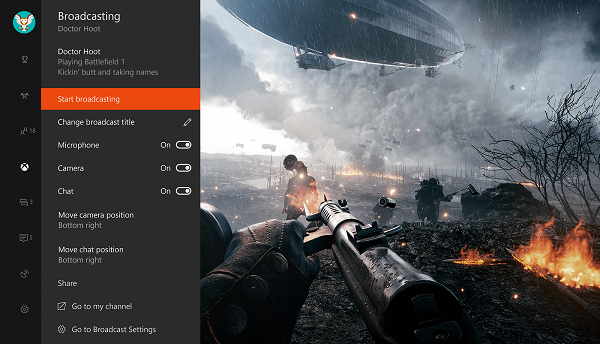 Xbox One owners can now try out the Beam streaming app.

Twitch has become the premiere destination for video game streaming for both desktop and console gamers, thanks to the wide availability of the service. However, Microsoft’s Beam streaming app is trying to catch up by now allowing Xbox One owners to stream their favorite video game content.

Unfortunately, the Beam streaming app is currently only available to a limited number of console owners who are part of the Xbox Insider program. If you’re one of the lucky users to have access to the app, you should know that the app has the same basic functions as Twitch, as you are able to either watch other people’s livestreams or broadcast your own.

If you have access to the app, you can easily start testing it out by pressing the guide button on the controller and selecting the icon for the broadcast function located at the bottom of the popup menu. Although Beam has the same basic functions as the Amazon-owned streaming app, it still tries to differentiate from Twitch by doing a few things differently.

For example, Beam claims that there is no delay between a broadcaster’s actions and when the audience sees it. This simple feature enables a lot more social interactions between the two parties, and it was one of the main reasons that led Microsoft to acquire Beam in August of 2016.

The app would allow Microsoft’s Xbox division to build a slew of other interactive features, which builds on the already available features of the Beam streaming app by allowing the broadcaster and the viewer to play together

According to Matt Salsamendi, Beam’s lead engineer, the team is both impressed and energized by the dedication of their daily users, and hope to further develop this relationship with the Xbox Live community.

When you first launch the Beam streaming app on an Xbox, you can enable what mic, camera and other basic functions you would like to use. More advanced aspects like the quality of your stream, audio levels, and video bitrate can only be changed from the broadcasting option located in the system settings.

What do you think about the launch of the Beam streaming app on Xbox? Do you watch or broadcast a lot of content on Twitch or Beam?