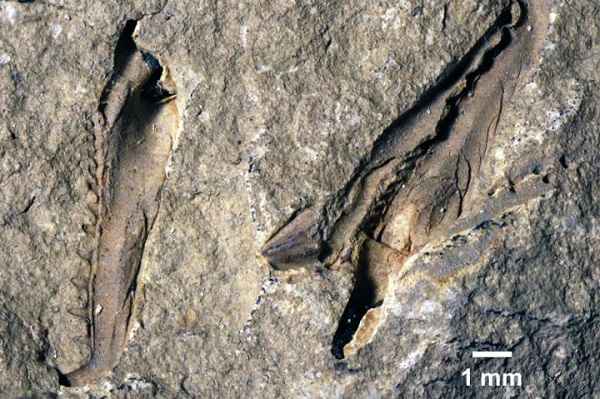 An international team of scientists has discovered a previously unknown species of extinct primordial huge worm. The most intriguing characteristic of the ancient worm fossil is the fact that it has huge snapping jaws, a trait which cannot be found in today’s worms.

Scientists from Lund University in Sweden, University of Bristol, and the Royal Ontario Museum were the first one ever study the fossil of the ancient worm, which has been stored in the museum ever since the mid-1990s. The fossil contains remains of a giant bristle worm, which is the marine relative of leeches and earthworms.

The team of scientists published the findings in the Scientific Reports journal and reveals that the species is unique among all other known fossil worms due to its large jaws, which are largest ones ever recorded in such a type of creature. More specifically, the jaws measure one centimeter in length and thus, can be easily visible with the naked eye, whereas other fossil jaws measure barely a few millimeters and are examined through microscopes.

By comparing the size of the jaws with those found in other living species, the researchers determined that the worm could have reached a body size of over one meter. This means they ancient worm was similar in size to the giant eunicid species, which used their powerful jaws to capture prey like fish and other small marine animals.

Mats Eriksson, the lead author of the study stated that gigantism in animals is both an interesting trait to examine as well as one whose ecological importance should be understated as it has been linked with various evolutionary advantages and competitive dominance. However, this trait has not been properly researched in marine animals determining a gap in the knowledge of scientists.

The ancient worm species has been named Websteroprion armstrongi. The name references both the scientists who found the fossils as well as Alex Webster, a bass player in the Cannibal Corpse metal band, which was considered to be a “giant” in his guitar handling skills.