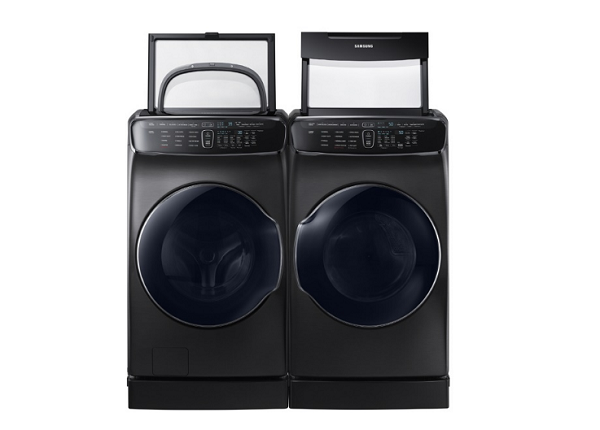 Doing laundry is one of the common chores in a household and one of the most time consuming as well, especially so if you don’t have a washing machine and a dryer in your home and instead you have to go to your local laundromat. However, Samsung new four-in-one laundry system promises to change the way we do laundry.

The news of the upcoming washing machine and laundry dryer comes a few days before the Consumer Electronic Show, where it will make its official debut under the name of FlexWash+ FlexDry laundry system. Samsung claims it is the most advanced and versatile system for washing laundry, offering users more options.

Samsung revealed that the FlexWash machine is the largest one in its class as it is composed of two loaders. The standard front module is where you can wash you biggest load of laundry having a capacity of five-cubic-feet, while the top loader is smaller and allows for a lighter load. Both can operate independently of each other and at the same time if you need them to, similar to what LG’s Twin Wash can do.

However, unlike LG’s washing machine, Samsung laundry system comes with just as smart and versatile dryer, the FlexDry. It replaces the standard loader with several compartments, each designed for drying a special type of clothing. For example, underwear can be dried in the Delicate Rack zone, while less delicate clothes like t-shirts can be thrown into the dryer’s largest loader, which has a MultiSteam feature. This allows it to both freshen up and disinfect the clothes while reducing the number of wrinkles you’ll have to iron out.

Furthermore, all compartments of the FlexDry system feature a temperature modification feature, which allows for either manual or automatic control of temperature, up to a 95 degrees Fahrenheit, if you really want fast drying.

Samsung’s new laundry system can be controlled with the company’s Smart Home app. This allows users to easily keep track of the progress of your laundry, without actually going to your laundry room and constantly checking it.

More information regarding the price and the release of the FleshWash + FlexDry laundry system will be available after the start of CES 2017.