You are here: Home / Technology / Polaroid Reimagines its Iconic Camera 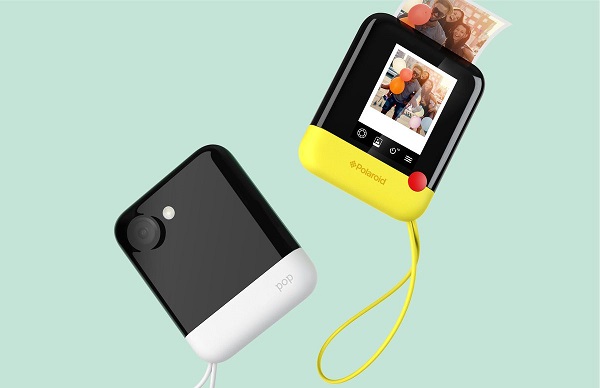 Polaroid Pop is a new take on the iconic camera.

Polaroid has been a staple company in the photography industry, making waves with its once incredible instant film camera. The company managed to marry that function with new technologies in what came to be known as the Snap camera. At CES 2017, the company has unveiled the new generation of its iconic camera that they are calling the Pop.

The Polaroid Pop manages to combine once again digital and analog feature in an amazing way, improving on the earlier generation while still providing the familiar design of its iconic camera. The new camera is larger in scale than the Snap while returning to the nostalgic 3 x 4 size format.

The Pop present at CES was not anywhere near ready, as the camera showed off could only showcase its delightful design and just turn on. However, Polaroid also showcased a number of printed picture and the exact specs and overall hardware interested users can expect from the Polaroid Pop.

In this regard, the camera comes with a 3.97-inch LCD touchscreen on the back which is meant to frame your shots and also used to navigate the menu, much like any current digital camera. The Polaroid Pop manages to double the megapixel count of the Snap, featuring a 20-mp CMOS sensor which will lead to the picture with superior clarity and resolution.

The reimagined iconic camera will print the picture on Zink paper, not on film. This is done by activating crystals to create the specific picture you want to print. However, the Zero Ink paper provides the picture with water and tear resistance. Furthermore, the picture will feature the classic border logo longtime Polaroid users will remember from the first camera.

The Polaroid Pop also comes with Bluetooth and Wi-Fi connectivity which facilitates the transfer of photos without bothering with USB data cables. Additionally, it can even act as a printer for other pictures. You can send photos from your Instagram account to be printed using the Polaroid Print app available on both Android and iOS. The camera features several editing features like adding effects and filters but nothing too advanced. It even has the ability to record 1080p video.

Polaroid did not reveal any specific price or release date, but their aiming for the $200 price range and a release during the holidays period.