You are here: Home / Science / Hubble Reveals a Microwave-Emitting Galaxy Known as a Megamaser 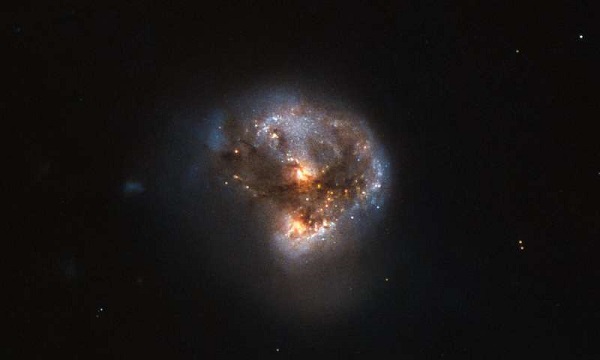 Hubble has discovered a microwave-emitting galaxy known as a megamaser.

If you consider the size of the universe, then scientists should expect to discover all sorts of strange phenomena, planets, and galaxy configurations. Hubble’s latest discovery involves taking a photo of a microwave-emitting galaxy.

The configuration of the galaxy makes it a megamesar. The name “mesar” stands for certain components in galaxies which emit microwaves in the form of a laser. They can be found throughout our Milky Way galaxy as well. However, Hubble’s latest discovery involves a megamaser, which is around 100 million times brighter than the ordinary masers.

The megamesar galaxy has been named IRAS 16399-0937, it is located more than 370 million light-years from Earth, and it acts like a giant cosmic laser which shoots microwave emissions rather than just visible light.

The microwave-emitting galaxy was captured using two of Hubble’s instruments which takes analyzed in various wavelengths. The instruments used to detect it were the Advanced Camera for Surveys as well as the Near Infrared Camera and Multi-Object Spectrometer (NICMOS).

It was thanks to the high sensitivity, field of view and resolution of the NICMOS instrument that the astronomers were able to observe the unique structure of the microwave-emitting galaxy. They discovered that besides being a megamaser, a surprising discovery on its own, the galaxy even has two cores. The scientists believed that it is the result of two separate cores who are in the process of merging over a long period of time. The southern and northern parts of the galaxy currently sit at 11,000 light years apart but are still deeply intertwined due to the high levels of gas and dust, giving it its strange structure.

Despite being in the process of merging, the two parts of the galaxy are quite different. The southern part named IRAS 16399S seems to consist in a starburst region, where new stars are rapidly forming. However, the northern part of the galaxy called IRAS 16399N has a Low Ionization Nuclear Emission Region. Furthermore, it even hosts a giant black hole with more than 100 million times the mass of the sun.

What do you think about Hubble’s discovery of the microwave-emitting galaxy?