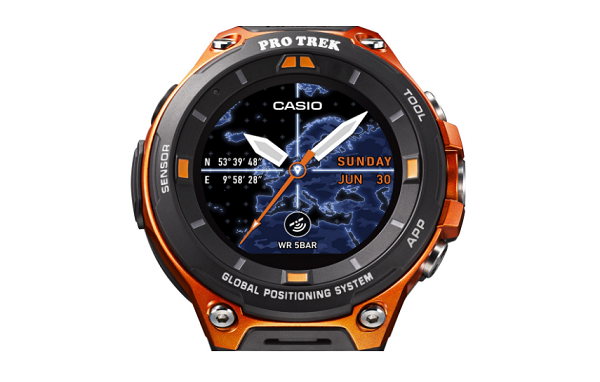 Casio joined the Android smartwatch market only last year as it decided to focus on appealing to people who enjoy exploring, treks and just being in nature, no matter where they may find themselves. Their first device was the WSD-F10, but at CES, the company revealed its improved successor, the Pro Trek Smart WSD-F20.

One of the most exciting aspects of Casio’s new Pro Trek smartwatch is the fact that it will be among the first devices which will feature Google’s upcoming and revamped Android Wear 2.0. The company also revealed the even their previous device, the WSD-F10 will receive the update once it goes live during the spring of 2017. It’s worth noting that Google has not set any specific update for their long-awaited update.

The Pro Trek Smart has many of the same feature and function as the old model, such as the same water-resistance rating, the three button on its right side, as well as that the specific dual-layer display which lets users switch between the standard Android Wear interface and a monochrome clock mode. However, it wouldn’t be a new smartwatch if it didn’t also have any new features.

As such, Casio finally decided to add a GPS sensor which consumes little power, in order to save the precious amount of battery during large trips and treks in nature. It was surprising that the first smartwatch did not include such a feature considering the audience it was meant for.

Furthermore, the Pro Trek Smart also adds support for color maps in both online and offline modes. An interesting feature for those interested in statistics is a new and improve activity tracker which allows for a more detailed information regarding your various activities.

To use color maps in offline maps, you will have to download beforehand, with the GPS tracking your location even when offline. Furthermore, the new Location Memory app allows the user to customize their maps with various markers and text. A new quality-of-life feature is that the new Pro Trek Smart comes with anti-fouling coating for the touchscreen. This helps the reduce fingerprints stains which can be a real annoyance.

The Pro Trek Smart WSD-F20 will be available to purchase on April 21. However, many interested customers may very well decide that the $500 price tag is not entirely worth it.