You are here: Home / Technology / Asus Releases Tinker Board as a Raspberry Pi Competitor 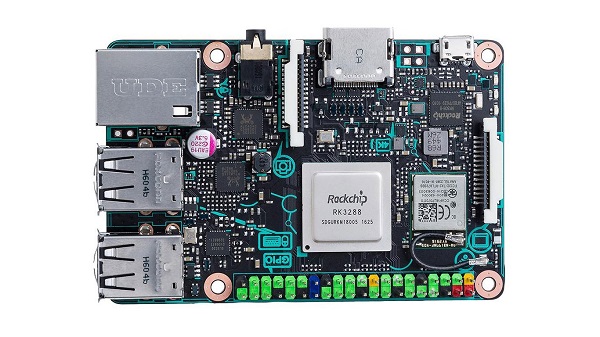 Asus released its first single-board computer in the form of a Tinker Board.

Single-board computers have grown increasingly popular in the last few years, thanks to their advanced capabilities, versatility, and their small package. Until now, the market was mostly dominated by Raspberry Pi, but Asus has decided to release their own version in the form of the Tinker Board.

Most single-board computers can handle the same type of tasks as a low-end computer. However, Asus plans to change all that by adding a new level of performance to their computer. Officially named as the Asus 90MB0QY1-M0EAY0 Tinker Board, the system is indeed more advanced than any of its competitors but its high specs will be reflected in its price.

The Asus Tinker Board is currently available for purchase in the United Kingdom for the price of $68, which isn’t considerably more expensive than the Raspberry Pi, considering its high-performance specs. In this regard, the device comes with a quad-core Arm Cortex A17 CPU running at a frequency of 1.8 GHz.

In the 8.5 cm by 5.3 cm device, Asus has also managed to cram in an Arm Mali-T764 GPU, 2GB of DDR3 RAM. However, unlike the Raspberry Pi’s CPU which supports 64 bits, the Tinker Board is only able to run on 32-bit instructions.

Nonetheless, Asus compensates with the more powerful GPU than Raspberry Pi’s Broadcom VideoCore IV inside the latest version of their computer. One of the most impressive features of the Tinker Board is its ability to play 4K video thanks to the H.265 4K decoding, which is superior to the 1080p version in installed in its competitors. However, if you think that buying a Tinker Board will enable you to access Netflix’s 4K streaming, then you should know that you still need a Kaby Lake and Windows 10 PC to access it.

The Asus Tinker Board also comes with a variety of other features such as support for gigabit Ethernet, built-in 802.11 b/g/n Wi-Fi system with swappable antennas, as well as support for SDIO 3.0. Furthermore, Asus has even developed its own OS for the Tinker Board, which has not been released yet, and no official date has been announced. Asus a lot of work cut out for itself as it needs to build the software community for the Tinker Board from the ground up.