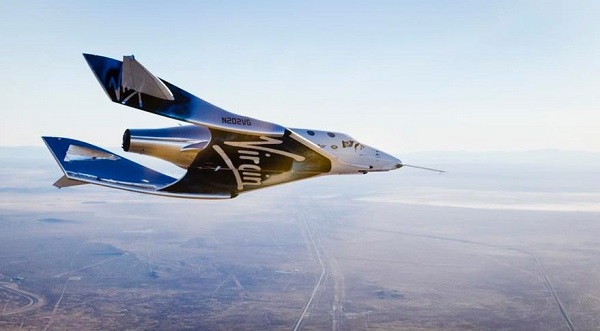 Two years after the unfortunate accident of the VSS Enterprise, the second SpaceSpaceShipTwo belonging to Virgin Galactic has successfully completed its first test flight. This will allow the company to start the second phase of testing of their commercial suborbital spaceplane.

It seems that Virgin Galactic, the company which hopes to develop space tourism, is on the rebound after the VSS Unity managed to complete the first of its many glide tests. The SpaceShipTwo took off aboard its carrier aircraft, the WhiteKnightTwo, from Mojave Air and Space Port in California on December 3rd.

The spaceplane separated from the carrier 50 minutes later, and gradually descended back to the runway by gliding continuously for ten minutes. Virgin Galactic tweeted the company’s success stating that the both the vehicle and crew are back safe and sound after the first round of gliding tests.

It worth noting that the company kept the spaceplane’s weight relatively light for its first flight as it was meant to test the aerodynamic performance of the vehicle. Only now, will they begin a tougher flight testing period before they even decide to start the spaceplane’s hybrid rocket motor in midflight.

Virgin Galactic President Mike Moses has stated that the number of test glide flights will depend on how fast the spaceplane will be able to achieve its objectives. The company is hoping to complete in 10, but they are not willing to go to the next phase of testing until the objectives are cleared, even if it takes 15 test flights.

The final goal of the company is to ensure the safety of the crew and of the vehicle during a variety of scenario in the coming years. The spacecraft is designed to carry a number of space tourists as well as research payloads up to an altitude of around 100 kilometers. This will allow the crew and the equipment to experience a few minutes of microgravity.

Virgin Galactic is currently the only company trying to develop the means for civilians to experience the genuine microgravity of space travel for a brief period. Hopefully, the company will have learned from its mistake which cost the life of the co-pilot of the VSS Enterprise.