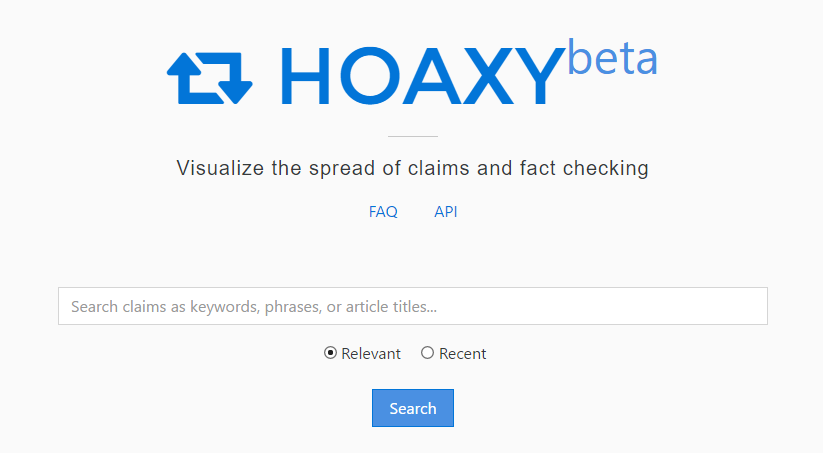 Hoaxy is capable of tracking fake news across social media.

Fake news in today’s society is a much bigger problem than anyone anticipated mostly due to the fact that people are rarely checking sources or considering the ulterior motives behind a specific news story. However, researchers have developed a search engine capable of tracking fake news on the internet.

Researchers from the Indiana University’s Network Science Institute and the Center for Complex Networks and System Research developed a search engine known as Hoaxy, which is currently in its beta version but capable of tracking fake news from any number of websites and platforms.

At this point in its development, Hoaxy is capable of tracking at least 132 sites which known to come up with a variety of fake news such as MSNBC.website, or WashingtonPost.com. Any user of Hoaxy is capable of monitoring the fake news sites and observe how their stories are being spread across various social media platforms like Facebook.

Hoaxy is one of many attempts to combat the dangers posed by the spread of fake news, which became increasingly evident that they can have a huge impact, especially during a general election. Hoaxy works in similar fashion to Google, the most popular search engine on the internet. However, its algorithm only searches the websites of fake news publishers. As such, Hoaxy will provide results based on the subject or word you typed in.

Even though Hoaxy is currently in its beta version, it’s even capable of tracking fake stories about fake news. For example, searching for “Pizzagate” will provide users with an article, among others, which claims that the man who assaulted a pizzeria in which Hillary Clinton supposedly ran a child sex ring, is an actor and the entire situation was propaganda.

After selecting a fake news article on Hoaxy, you can choose to see how much it spread across social media using two charts. One chart reveals the article’s popularity over time by the number of persons who liked it or commented on it, while another chart shows how it spread on Twitter and Facebook, two of the most prevalent social media platform.

Indiana University researchers developed Hoaxy as a way to collect data on the spread of fake stories so that they can better understand the overall phenomenon and learn how to combat it more efficiently.