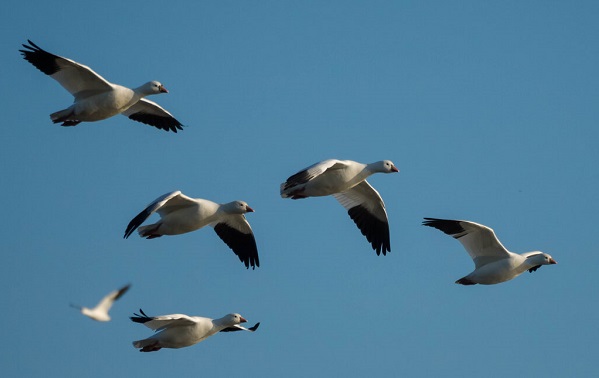 The toxic water of the Berkeley Pit might have affected many migrating snow geese.

Thousands of migrating snow geese landed near the Berkeley Pit in Butte on Tuesday alerting the officials from the Fish and Wildlife Service. Dead birds have been already spotted around the site, but Montana Resources officials cannot establish how many of them died because no boat is allowed in the pit.

In other words, the biologists won’t be able to retrieve the dead specimens for a full autopsy. According to Brent Esmoil, the wildlife deputy field supervisor, some birds will most likely be washed ashore in a couple of days, so they will be analyzed then.

Based on the reports, the geese landed near the pit Monday night due to a powerful snow storm. Mark Thompson, the MR Environmental Affairs Manager, says that if the geese spend too much time bathing in contaminated water, they will ingest too much of it.

It is worth mentioning that the Berkeley Pit is the result of many years of mining. Although the companies responsible for this pollution stopped their activity in 1982, the pit has been filling with toxic water ever since.

The MR officials have spent over two decades hazing the birds away with the help of firearms and other noise makers. Unfortunately, the geese spent a few hours in the toxic water until the authorities scared them off.

Thompson said that the pit was almost covered with birds Tuesday morning. One MR employee fired a few shots in the air using an AR-15 rifle. Thompson added that although 90 percent of the snow geese were hazed off, groups of between twenty and thirty birds were still returning to the pit.

MR officials will join their efforts with Wildlife, DEQ, Parks, and EPA officials to safely remove the geese that come back to the Berkeley Pit. In 1995, 324 migratory snow geese died after they ingested a deadly amount of the contaminated water.

Since then, Atlantic Richfield Company and mine officials developed a program to haze off any birds that came close to the pit. Even if the biologists haven’t been able to count how many snow geese died, they are concerned that the number will be much higher as some of them might still die because they ingested the toxic water.