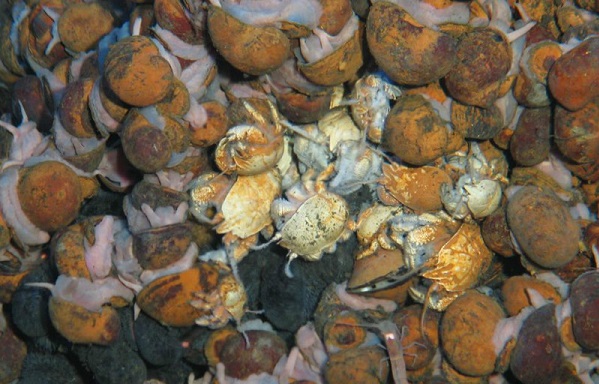 Despite our technological capabilities, humanity has not yet fully explored the entire Earth nor have we found all the species of animals that inhabit. Although most of the current news cycle is dominated by how certain species are increasingly threatened, scientists also discover new species in rare occasions.

Researchers from the Southampton University in collaboration with scientists from the Natural History Museum in London as well as from the University of Newcastle developed a robot survey in the Indian Ocean. They were looking to explore hydrothermal vents near the ocean floor.

Their first expedition, which took place in 2011, provided them with valuable data regarding the thermal events but probably more important, it led to the discovery of six new marine species who lived near them. More specifically, the scientists explored a small area of the Southwest Indian Ridge, which separates the ocean between Antarctica and Africa.

The hot geysers are known as Longqi, or Dragon’s breath and are located at around 1,240 miles southeast of the Island of Madagascar at a depth of 1.7 miles below the surface of the ocean. The vents are a junction where magma meets the seawater which results in warm water that attracts various marine species.

Among the newly discovered marine species, scientist found a crab with hairy chest similar to the Hoff crab, two species of snail as well as a new species of scale worm, limpet, and a deep-sea worm.  These new marine species will be added to the 400 new ones already discovered near hydrothermal vents around the world.

Scientists believe that the warm water attracts species of animals from multiple regions who are seeking warm water filled with various minerals and food sources, which leads to the creation of entire ecosystems. The researchers published their findings in the journal Scientific Reports.

Despite the importance of their discovery, the area was already licensed for the exploration of mining opportunities for seabed mineral. However, the scientists are now asking the project to be postponed in order to analyze other vents in the Indian Ocean and determine the connection between the various marine species. Scientists believe that any seabed mining operations will damage the hot geysers and thus endanger the rare animals.