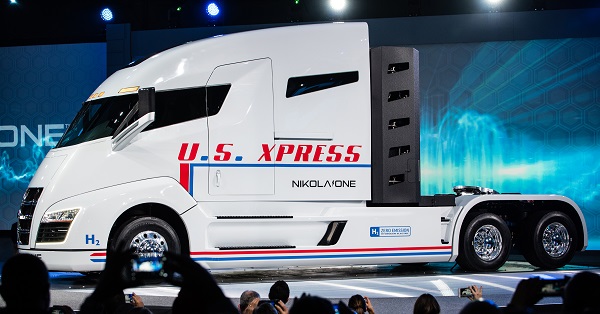 It seems that the electric vehicle revolution does not involve only cars belonging to general consumers. Nikola Motors, a recent startup company, has unveiled their upcoming hydrogen-electric truck, Nikola One. The new truck hopes to become the standard vehicle used for mass deliveries.

The main aspect of the truck is that Nikola Motors decided to use hydrogen as fuel. This means that the electric motor specific to all EVs will be powered by a hydrogen fuel cell which generates the required electricity. Although hydrogen-electric cars can provide a longer range and a faster refueling time, they have not seen wide use as it difficult to set up the proper infrastructure.

The class 8 Nikole One hydrogen-electric truck will have a range varying between 800 to 1,200 before it needs to refuel as it also comes with a 320 kWh battery. The company will also provide a full tank with a 72-month leasing program. To make the truck viable in North America, the company has announced that they will start building refueling stations in the US and Canada starting in 2018, which will be finished in 2019.

At the moment, Nikola Motors still hasn’t decided where exactly to build its new trucks as they will make a final decision in the first half of 2017. Nonetheless, they are optimistic that they will be able to release the 1,000 horsepower and 2,000 ft.-lb. torque truck by 2020.

The hydrogen fueling stations are key to the success of the truck despite its extremely long range. Thanks to the hydrogen fuel cell’s the truck will be able to refuel in only 15 minutes. This is a massive improvement over even the best electric fast-charging networks which take around an hour. Not to mention that using a typical outlet can take hours to recharge the battery of an electric car.

During the company’s event in Salt Lake City, Nikola Motors has also unveiled another hydrogen-electric truck. The Nikola Two offers the same range capacity as the One but comes with a smaller cab as well as an increased maneuverability. The truck will also be available starting in 2020.

Unfortunately, the company did not reveal the pricing options for any of the trucks, but it stated that the information will be shared soon.