You are here: Home / Technology / Bridge Headset Uses Your iPhone for Mixed Reality 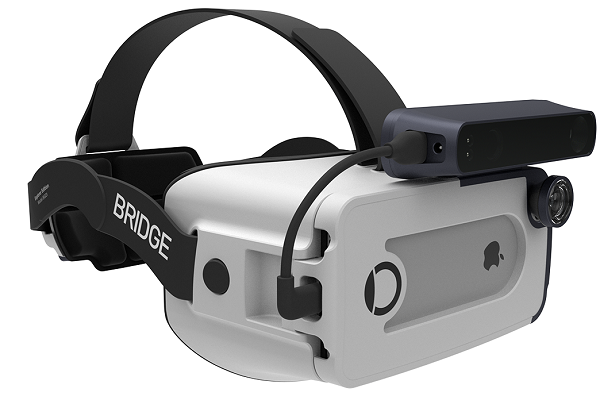 The Bridge headset creates mixed reality with the help of an iPhone.

VR headsets for mobile have been mostly developed for Android phones. Apple’s iPhone was left out from this type of market, despite having several apps and features. However, this isn’t the case now thanks to the Bridge headset which creates a mixed reality experience exclusively for iPhone users.

Currently, the technology is split between virtual reality and augmented reality headsets. However, the company behind the Bridge headset, Occipital, manages to combine the best of both worlds to create an immersive experience by combining your environment with a digital overlay of it, which characters from the demo can interact with.

The Bridge headset works pretty much as all popular mobile VR headsets. All you have to do is get your iPhone 6, 6S, or 7, snap it inside the headset and then strap it to your head. Unfortunately, in standard Apple fashion, the device will cost you a pretty penny. The few hundred units which will be available for purchase next week will cost $499. However, the company will offer a wider release in March, when the Bridge headset will sell for $399.

The unique capacity of recreating environments with high detail is due to the company’s Structure Sensor. It consists of a marker-sized strip of sensors and cameras which can map your environment. The Sensor also provides the headset with inside-out positional tracking. This allows users to move around in the virtual world without the need for external cameras.

Occipital does not have any specific launch titles for its official launch. The Explorer edition comes with a demo app that mainly allows users to interact with a robot named Bridget. Users can even experience different changes in their environments, from changing your room to look like the deck of a spaceship, to just seeing how it would look like in a new color or with new furniture.  As such, the Bridge headset could be revolutionary for the design industry.

The company hopes that its upcoming Explorer Edition will garner the attention of developers interested to create content on the platform, which the device drastically lacks, at least for the moment. With more content and hopefully a cheaper price point, the Bridge headset could become a must-have product for iPhone users.