You are here: Home / Science / NASA Finished Work on the Webb Telescope 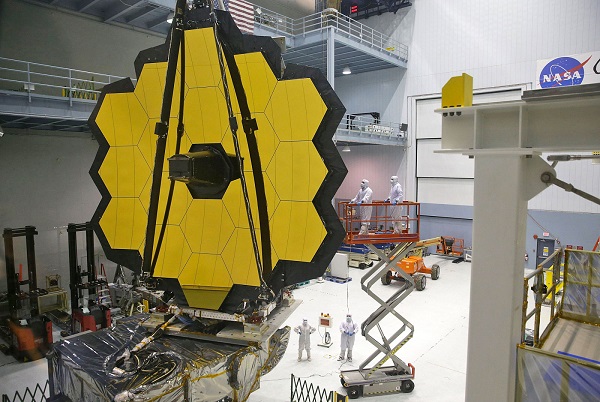 The James Webb Telescope has been completed.

NASA has recently announced that they have completed work on the replacement of the well-known Hubble Telescope. After two long decades of innovation and development, the James Webb Telescope is finally completed. Thanks to its superior technology it will provide scientists with a deeper insight into the mysteries of the universe.

The James Webb Space Telescope, JWST for short, costed around $8.8 billion over a period of twenty years. The telescope is equipped with a gold coated mirror array measuring 21-feet. The mirror can collect up to seven times more light than what the Hubble Telescope is able to gather. It is even able to scan the infrared spectrum and see through dust particles. The advanced technology will allow the scientists to see the state of the universe from 13 billion years ago.

John Mather, the scientists in charge of the project, has stated that the Webb Telescope is the result of decades of innovation and hard work. The finalized project was officially unveiled by Charles Bolden, a NASA administrator.

Another essential capability of the Webb Telescope is the fact that it has enough power to search for habitable exoplanets. Mather emphasized this purpose as NASA hopes to discover if any other planets in the universe have enough water to form an ocean. Its high-level capabilities are owed to the mirror, which is performant enough to even detect a bee on the moon.

In regard to its more specific  technical capacities, the JSWT is able to detect infrared light by bein cooled to a temperature of around -220 degrees Celcius (-364 degrees F). This temperature is only 50 degrees above absolute zero. This can be done by using five membrane layers to insulate the from the sun’s temperature. The membranes were finished as recently as just last week. The moment of their installation marked the finalization of the work on the telescope.

The launch mission is slated for October 2018. The telescope will be brought into Earth’s orbit using ESA’s Ariana 5 rocket, one of the world’s most reliable vehicles.  It will reside at the second Lagrange point where it will deploy its sun shield, antenna, and both primary and secondary mirrors. The mission won’t be considered a success until the telescope will send back pictures of a moderately bright star field.