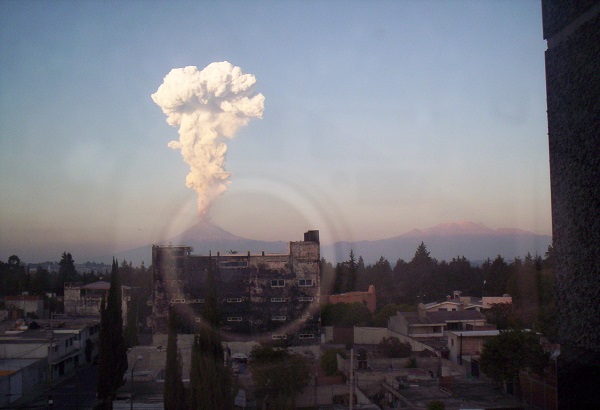 The Popocatépetl Mexican volcano has spewed a huge column of ash on Friday.

The Popocatépetl Mexican volcano has started its activity since Friday when it began to spew a huge column of ash almost 3.1 miles up in the sky. Near the location of the volcano, in the southeast region of Mexico City, there are a number of villages. The residents have been warned to prepare for eventual seismic activity.

An online warning was issued by Mexican National Center for Disaster Prevention (CENAPRED) stating that the Popocatépetl volcano has had a number of 160 exhalations including steam and gas emissions since November 25th.  Three additional explosions have reportedly occurred on Saturday morning. During the following night, the crater also showed incandescence with a number of exhalations.

In response to the activity of the volcano, the Mexican national authorities have issued a Yellow Alert on Mexico’s Volcanic Traffic Light warning system, which informs people how to behave during the various degrees of volcano activity.

The Yellow Stage 2 alert means that the local municipalities have to be prepared at any time to evacuate their homes if the activity of the volcano intensifies. Authorities have imposed a 12-kilometer security perimeter around the volcano. The municipalities which are a high risk of being affected by the volcano are Ocoyucan y Puebla, San Nicolas de Los Ranchos, Tochimilco, Tianguismanalco, Cholula and Atlixco.

The security perimeter implies that no one should gear near the volcano or its crater for any reasons. The toxic gasses and fragments being spewed out can pose a high level of danger to a person’s life. CENAPRED will update their warning status as soon as the volcano shows signs of intense or lower activity.

Popocatépetl is only one of the 1,500 active volcanoes throughout Mexico. However, Popocatépetl which translated as “mountain that smokes” it is the second tallest peak in the country with a height of 17, 802 feet. Citlaltepetl is the highest peak in Mexico measuring 18,491 feet.

Popocatépetl has been active since 1994 and has had over 15 major eruptions since the 16th century. It’s most recent one only happened three months ago, on August 17th. Nonetheless, local communities have grown accustomed to its frequent activity and has become a part of their daily lives.

What do you think about the eruptions of the Mexican volcano? Should all people evacuate?