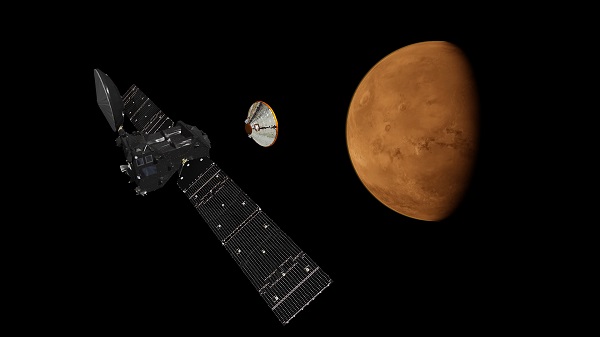 A few months ago, the European Space Agency (ESA) with assistance from the Russian federal space agency, launched the ExoMars program. It involved both a lander meant to test the technologies of future rovers landings on Mars as well as a Trace Gas Orbiter (TGO). While the first spacecraft crashed, the TGO orbits the Red Planet and it is starting to test its observation equipment.

The Mars orbiter arrived at the set location in Mars’ orbit on October 19th. Since then, it has made a full rotation around the planet once every 4.2 Earth days. However, only now the TGO was scheduled to being testing and calibrating the four suites of instruments it is equipped with. The testing was already begun on November 20th and will continue up to Monday, November 28th.

ESA officials have expressed their enthusiasm about finally being able to observe how the instruments perform in the specific environment they were designed for and to analyze the first bits of data that come back. There is a great deal of high expectations and pressure for everything to go as planned, especially since the unfortunate crash of the Schiaparelli lander.

The TGO had a better fate than the lander as it successfully managed to insert itself into the orbit of Mars. The probe is currently orbiting the planet on a highly elliptical patch which brings it as close as 140 miles to it and as far as 60, 900miles.

The instruments which are being tested consist of a neutron detector which has already started to collect data. However, the three other instruments suites only recently began their trial run. These are two sets of spectrometers meant to identify methane among other trace gasses. Its last instrument consists of a powerful camera system which will take high-resolution photos of the planet as well as its small moon known as Phobos, during its testing period.

After every instrument is deemed fully operational, the Mars Orbiter is scheduled to shift its orbital path in 2017 in order to bring much closer to the planet throughout its entire rotation. ESA officials estimate that the probe will be in place by March 2018 and its mission will last around two years. However, it will still continue to function as a communications relay for Mars rovers until 2022.