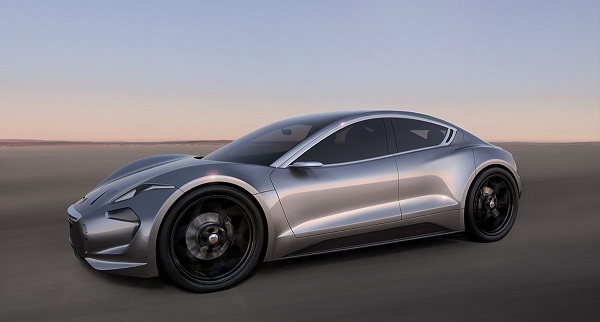 Fisker Inc., is a new electric car company in the auto industry. It was founded by Henrik Fisker and they have decided to reveal the design and technical specs of their first vehicle, the EMotion luxury sedan.

The company claims that the car will be able to reach a top speed of 161 MPH as well as having a 400-mile range thanks to the new technology of the electric battery. The company has decided to use a new graphene battery, which is currently under development at UCLA, which according to the researchers, it charges faster than the standard lithium-ion version.

EMotion luxury car has a futuristic design and also takes aerodynamic performance into consideration in order to achieve its very ambitious speed and range. The company has decided to move the interior space slightly forward in order to make it similar to luxury vehicles. The recent announcement has revealed that the car will have a composite frame constructed of carbon fiber and aluminum, featuring a low hood line, and an integrated spoiler.

Other noteworthy features of the car include the underbody diffuser, adaptive LED headlights, dihedral ( butterfly doors). Additionally, the EMotion luxury sedan will come equipped with all the necessary technology, software, and hardware, to be fully autonomous in the future. Unfortunately, the announcement did not reveal which company will provide the tech. More details in this regard will be made available soon.

Fisker also claimed that the car will have ample rear legroom despite the fact it has the looks of a sports car. Passengers will also have access to screens and the infotainment system from any seat, both rear, and front. This feature is designed with the car becoming autonomous. The company plans to build the vehicle at an existing facility in California and plans to fully unveil it in mid-2017, when the first deliveries will also be announced.

Fisker seems to be pulling all the stop on their EMotion luxury sedan in order to compensate for the failure of his previous endeavor in the electric car industry, the Fisker Karma. The car was plagued by a series of reliability and battery problems, and eventually, the design was sold to China’s Wanxiang Group.

What do you think about this new EMotion luxury electric car?