You are here: Home / Science / Study Finds Coconut Crabs Are the Strongest Pinchers 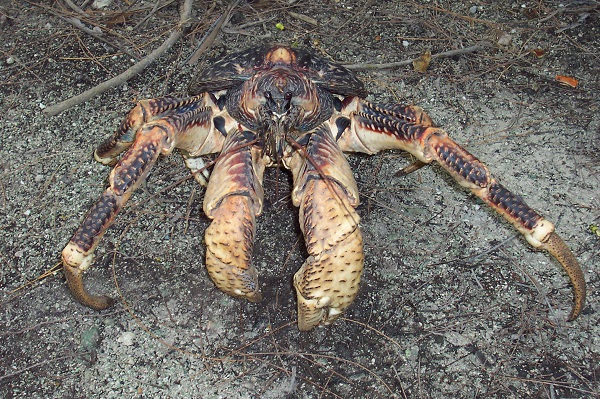 Coconut crabs have the highest pinching strength of all crabs.

Crabs are known for the strength of their pinches, but among all species, the coconut crabs take the crown as the strongest pinchers on land. Researchers analyzed crabs of various sizes and found that the largest one they studied had the highest pinching force of all crabs.

A team of researchers from the Okinawa Churashima Foundation in Japan examined a number of coconut crabs, scientifically known as Birgus latro. This species is the largest land-dwelling crab on the planet. The scientists tested the pinching strength of 29 coconut crabs of various sizes found throughout Okinawa.

The study, published in the journal PLOS One, reveals that the largest crab could pinch at around 750 pounds of force or almost 3,300 newtons, and can even lift 66 pounds. For such a small animal this is an incredible amount of force they can exert. For comparison, the average human bite can only produce 265 pounds of force while the punch of an Olympic boxer can produce up to 770 pounds of force.  In the animal kingdom, only the alligator and a few other species can exert such a force, but they are all considerably bigger than the crab.

Scientists pointed out that the coconut crabs diverged from the hermit crab, but were able to develop better claws because they lost the need to carry a shell for protection as they developed a hard, calcified abdomen instead. Researchers examining the crabs were pinched a few times in the process of measuring their force.

However, they mostly use their giant claws to ward off predators and access a variety of foods that most animals don’t have access to. Most notably, they can indulge in coconuts, after which they are more commonly known, but they can also eat various hard-bodied animals, carrion, and different types of fruit found throughout the Pacific and Indian Oceans, where they make their homes.