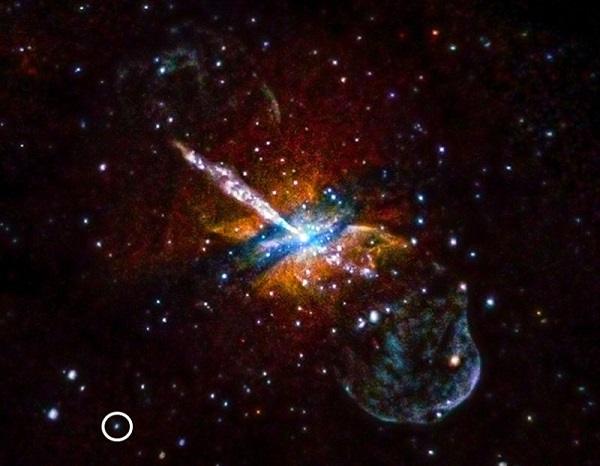 An image displaying the objects emitting the X-Ray Blasts

Astronomers are baffled over two very mysterious objects that emitted X-Ray Blasts. They a unique phenomenon, unlike anything scientists have ever discovered, as such, they may be a new type of astrophysical event.

When the objects emitted the x-ray blasts, they suddenly become incredibly bright. More specifically, 100 times brighter than they actual state in less than a minute. After an hour has passed since the event, the objects return to normal. Their behavior is similar to that of a pulse.

According to Jimmy Irwin, an astronomer at the University of Alabama and the leader of the study, the observed phenomena is unique. Previously, researchers were able to observe other objects that flare up, but the new discovery may be something new entirely. The objects that usually can flare up and emit x-ray blasts are called ultraluminous X-ray sources (ULXx). They originate from black holes and neutron stars, which are the remains of a star after it has consumed all its fuel as a supernova.

What sets apart standard ULX objects from the newly discovered ones are the fact that sources of these new X-ray blasts are thousands of times brighter. For a very short period, they became of the brightest ULX to ever be observed in an elliptical galaxy, according to Peter Maksym, a co-author of the study and researcher at the Harvard-Smithsonian Center for Astrophysics.

Another aspect that makes the newly discovered objects so intriguing to scientists is that they are located in old stellar populations, unlike other stellar objects that can flare up as often as these. Typical objects that have this behavior are called magnetars. They are a young neutron star with a very strong magnetic field. They can produce extremely bright X-ray blasts but only take a few seconds to return to their standard level of X-ray radiation compared to the hour the new objects require.

One of the mysterious objects resides outside the Centaurus A elliptical galaxy, which is 13 million light-years from Earth. The other one can be found in a globular cluster of stars found on the exterior extremities of NGC 4636, located 47 million light-years away from us. They flare at constant intervals, according to the study published in the journal Nature.