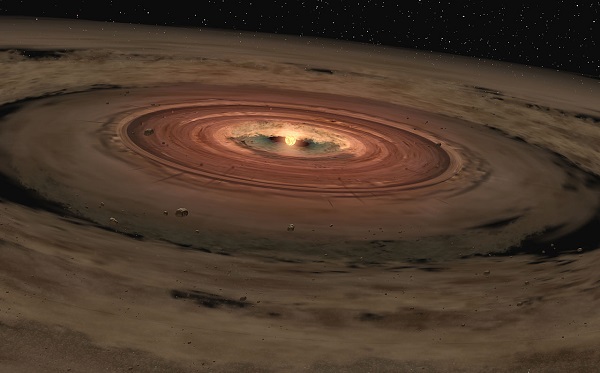 Representation of a planetary disk orbiting around a dwarf star.

A group of researchers made from both professional astronomers and citizen scientists alike has a made a fascinating discovery. They found what appears to be the oldest planetary disk that has ever been discovered, sitting at around 45 million years old.

The diverse group of researchers, led by Steven Silverberg, from the University of Oklahoma, stumbled upon a peculiar star surrounded by a circumstellar disk. The disk is similar to a large ring of dust and gas which orbits around a newly formed star. As the material collides and aggregates in increasingly larger sizes, planets can emerge, and eventually leads to the creation of a solar system.

According to Silverberg, the planetary disk orbits around a red dwarf, a phenomenon which is rare in itself, but the most interesting thing about it is that it has sustained the disk for an unusual amount of time. According to the study, published in The Astrophysical Journal Letters, most disks tend to disappear after a maximum of 30 million years.

Scientists were able to determine that the disk has existed for around 45 million years because the red dwarf at the center is a member of the Carina stellar cluster, in which most stars have that age. Its age makes it the oldest planetary disk to ever be discovered, according to the researchers.

It is unclear at this point why and how the planetary disk has persisted all these millions of years. One possibility may be the fact that scientists have mistakenly estimated its age since it is only based on the fact that the dwarf star has an age similar to other stars in the Carina association. As such, more research into the subject is required to fully understand it. However, if the planetary disk truly is an anomaly then it will become a standard system, used to understand the lifetime of disks. Additionally, it will help scientists understand and explain why disks around dwarf stars are so rare.

The research team who made the discovery involved citizen scientists from the Disk Detective project led by Dr. Marc Kuchner at NASA. The project allows users to make classifications by watching ten-second videos of data from different NASA surveys.