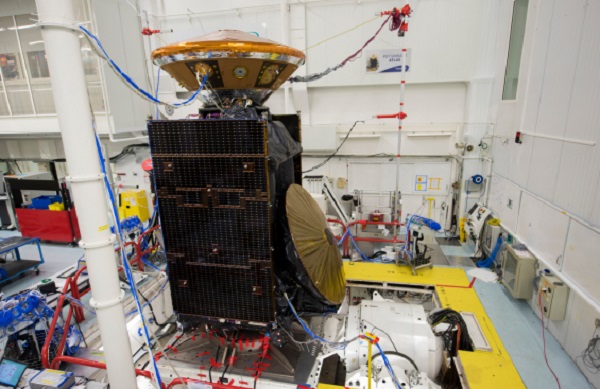 The ExoMars spacecraft prepares to separate as it reacheas Mars.

It was only seven months ago that Europe and Russia have launched their two ExoMars spacecraft. Now the two combined spacecraft are three days away from Mars and are preparing to separate from one another as they get closer go Mars and their eventual landing on the planet.

The ExoMars mission is a joint project between the Russian Federal Space Agency and the European Space Agency. Like the other missions to Mars, its purpose was to discover if there is or ever was life on the Red Planet. The mission involves two ExoMars spacecraft: the Trace Gas Orbiter and a lander which is called Schiaparelli. During was launched as a connected spacecraft and traveled together for the most part of the seven-month journey.

Both spacecraft are preparing to separate in order to start their primary individual mission. On one hand, the Trace Gas Orbiter (TGO) is tasked with orbiting Mars and analyzing the components of its atmosphere in hopes of finding any signs of life. After the separation, the TGO will have to change its trajectory slightly so it can enter the planet’s orbit on Wednesday.

On the other hand, the Schiaparelli will need to land on Mars. It will be the first European lander to ever undertake such a task. Unfortunately, it won’t be easy as Mars has a less dense atmosphere than Earth. It means that it won’t provide as much cushion to slow down the lander. Nonetheless, the cone shape of the Schiaparelli which is equipped with various parachutes, thrusters, and even a heat shield will help it land safely on Mars’ surface. All of its features will work to slow down the lander as much as possible from its descent of 13, 000 miles per hour

The ExoMars Spacecraft separation will take place Sunday at around 10:42 AM ET. Fifteen minutes after the separation, the Schiaparelli will enter a hibernation mode to preserve energy for its descent to Mars. Once the lander successfully lands, it will start to send back data to how the entry, descent, and landing went. After two days the onboard battery will run out of power. The probe isn’t equipped with any solar panels for energy as it’s only a demonstration mission to prove that ExoMars spacecraft mission is feasible.