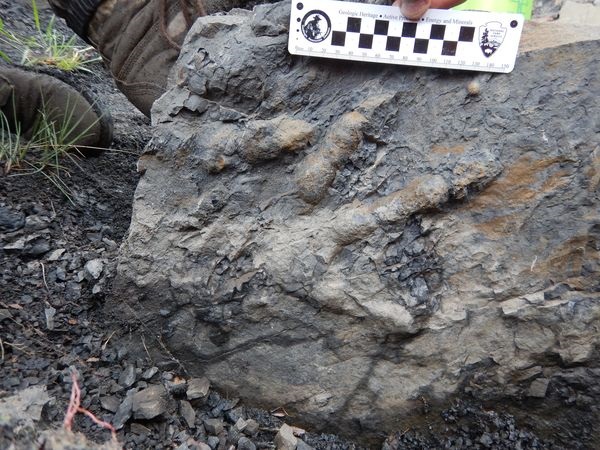 Dinosaur bones were finally found in Denali National Park after ten years since the first tracks.

Over the long years of their research in the Denali National Park, paleontologists were starting to doubt the saying that where there are dinosaur tracks there are dinosaur bones. However, after ten years they were finally able to find dinosaur remains in the park.

In 2005, researchers exploring the Denali National Park in Alaska found the first evidence that dinosaurs previously roamed those lands. The evidence was in the form of tracks from a theropod in the Cantwell Formation region of the park. In the following years, thousands more track were discovered but any dinosaur bones eluded the paleontologists.

However, after ten years of searching, during an expedition in July, researchers discovered several fossilized bones. The expedition included paleontologists from both the University of Alaska Fairbanks and the National Park Service. They also found more fossilized impressions of dinosaur footprints as they were made into mud which later turned into rock.

The landmark discovery consisted of four bone fragments of only a few inches long, that were once part of a large dinosaur and not from a smaller reptile, mammal or bird. The bone remains are very similar to other bones of herbivore dinosaurs found throughout Alaska, according to the scientists. They also analyzed the microstructure of one of the bones and found that based on the shape and structure, they think that it might have belonged to a rather large ornithopod dinosaur.

Known as duck-billed dinosaurs, among which the Hadrosaurs were common in Alaska during the Cretaceous period. Despite the fact the climate in the region of the Denali National Park was warmer in those times, this discovery made scientists think that the dinosaurs were able to survive in cold conditions.

The next step of the analysis of the dinosaur fossils is to cut some microscopically thin slices from the bones in order to study their internal structure. This type of analysis allows researchers to determine the type of dinosaur that the bones belonged to. A microscope will also reveal the growth lines of the bones and determine how fast the dinosaur grew and how old it was when it died, similar to tree rings.

What do you think about the dinosaur bones discovery in Denali National Park?