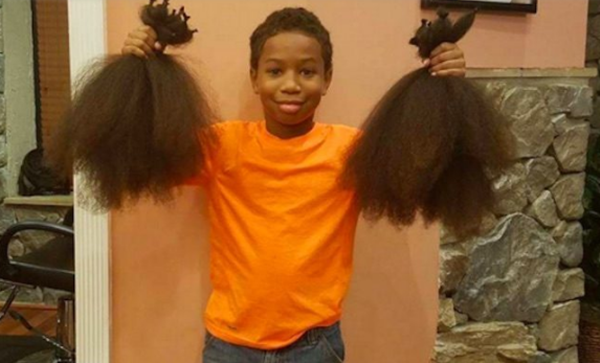 Thomas Moore decided to grow his hair and donate it do cancer patients.

Thomas Moore, a 10-year old, can be called a true hero. He decided to grow his hair so he could donate it to cancer patients. It all started when he and his mother were watching a video where a girl named Kyssi Andrews,  said she lost all her hair during treatment for cancer. That was the moment when Thomas decided he wants to help as much as he can those who suffer from cancer.

It was not easy for the boy to this. At first, things were easy because the hair was shorter. After a while, the Afro hair begins to grow and it was difficult to keep it nice. The only solution they had was to  have his hair braided, but he did not give up. After two years, on September 10, he cut his hair. It was a long journey, but he managed to achieve his goal.

His mother said that his hair is growing very fast. It was so inspiring to see a 10 years-old boy who wants to help the others so much.Thomas was happy he managed to do something for his society and his hair will be enough to make three wigs.

It is not easy to grow hair, especially for a boy. Not many people like their hair long and sometimes, even if they do at first, it is more difficult for them to handle it. The most important thing is that Thomas did something that helps another human.  If we have more people like him, our society would develop better. There are a lot of things we can do if we want to help other people, but how many of us were really involved?

His aunt shared before and after photos of him on Twitter. There were thousands of people who liked the photo and who look up to him for his action.  Thomas Moore should be an example for us.  He is just a boy and he has already learned how important is to help other people.

There are a lot of cancer patients who have no hair after the chemotherapy. They want to look good, to have a normal life and sometimes this implies having a wig. They will really feel better and you will know the priceless feeling of helping someone.