You are here: Home / Tech & Science / The 5 Second Rule Proved to Be Just a Myth 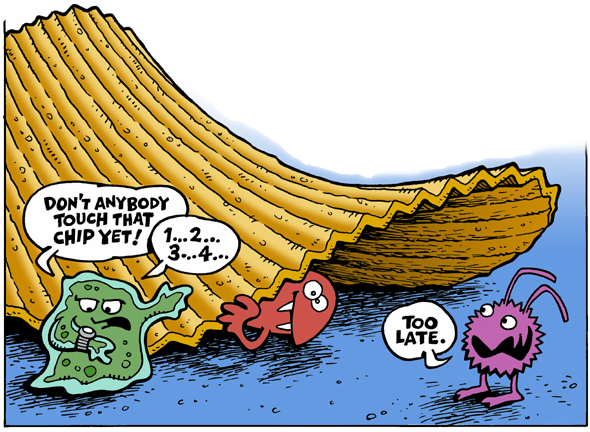 Many of us have invoked the 5 second rule at least once in our lives after dropping something on the floor. However, a recent research proves that the food left on the floor even for less than 5 seconds is still not safe to eat.

Researchers at Rutgers University in New Brunswick along with Donald Schaffner, the lead author of the study suggest that the dropped food could be contaminated almost instantly, in less than a second. Schaffner is also an extension expert in food science.

The researchers analyzed how varying time limits affected diverse foods. They also looked at two other investigations of which the research findings were delivered to the publishers but which were not published.

Analysts dropped different texture foods on various surfaces in their quest to examine the transfer of the germs from each surface to every food piece.

To complete the study, scientists left the food on the surfaces for less than a second, five seconds, thirty seconds and around 300 seconds. They produced more than 128 possible situations for 20 times which led to a total of 2,560 analyses.

As expected, the germs were spread more rapidly when exposed to the surface for a longer period and when the surface was moist. However, scientists determined that contamination could take place in less than a second, thus proving that the 5 second rule is a myth.

Moisture seemed to affect the transfer of bacteria from surface to food the most. Because bacteria travels with the moisture, scientists suggested that the wetter the food, the greater the danger of transfer.

A food scientist at Clemson University, Paul Dawson, says that the findings of the study demonstrate that the surface and the kind of bacteria determine if a piece of food dropped on the floor could or could not be eaten without causing too much harm. Surely if an individual drops something on a hospital floor, he would not want to pick it up.

However, someone with a healthy immune system would not be harmed if picking up and eating a cookie from a dusty floor. Dawson believes that in 99 percent of the times, this process would not affect anyone.

A Rutgers University scientist, Donald Shaffner, is sure that the 5 second rule will still be supported because people want to believe that it is true.