You are here: Home / Tech & Science / The Most Murderous Mammals are the Meerkats 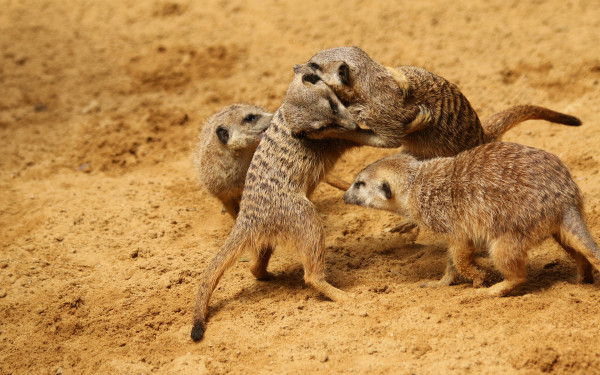 Meerkats are among the most murderous mammals

The cute, innocent-looking Meerkats have been recently declared by a new study the most murderous mammals acknowledged to science. For the research,  José María Gómez from the Grenada University in Spain along with colleagues decided a list of 1,024 species of mammals based on the estimated deaths that were generated by members of the same family. The findings of the study showed that  19.4 percent of all the occurred deaths in the meerkat species were caused by their own kind.

Meerkats are carnivorous animals that usually live in groups. The groups called mobs frequently contain 20 members, but bigger groups could reach more than 50 group members. Notwithstanding living in groups and cooperatively hunting, the animals are one of the most murderous mammals.

Scientific documents have already been made regarding their violence and criminal capabilities. Female meerkats are known to resume to infanticide to secure resources or maintain dominance, according to a 2006 University of Cambridge research.

Having a strictly hierarchical organization, pregnant meerkats would eliminate offspring born to subordinates. Moreover, the subordinates also remove other pups born to other females to assure better supplies for their baby. Despite their stature, the meerkats are one of the most murderous mammals, surpassing the brown bear whose crime rate is only 9.7 percent.

Gomez and colleagues followed to understand the human behavior when conducting the study. 500 to 3000 years ago, human lethal violence was somewhere around 15 and 30 percent. The researchers believe that although attracting the intellectual’s attention for over two millennia, the sociological, psychological and evolutionary roots of human violence is still debated.

Primates usually appear to have a higher tendency towards violence. It is associated, most of the times, with maintaining a territory and living in social groups. Chimpanzees account for nearly 4.5 percent of deaths among their species while eastern gorillas cause 5 per cent of deaths among other gorillas.

However, the western gorilla was the less likely to result in deadly violence with a rate of just 0.14 percent, followed by the famously peaceful bonobo with a 0.7 percent rate.

The most friendly animal seemed to be the margay, a cat native to Central and South America. Among more than 1000,000 deaths of the species, there was no example of a same-species crime. Furthermore, the Thomson’s gazelle, zebras and multiple species of bats also seemed not to cause any murders among their species.