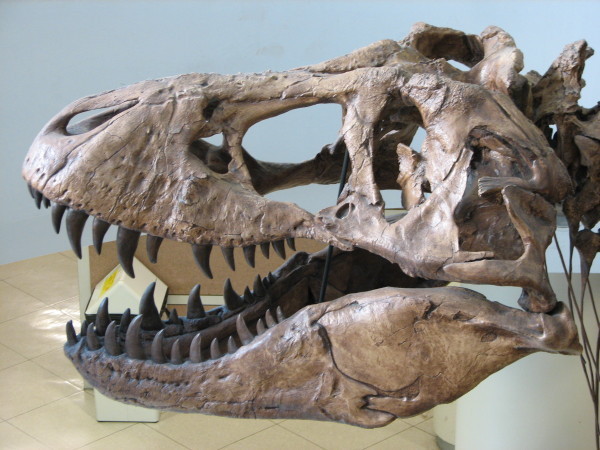 A massive tyrannosaurus rex skull has been discovered in Montana

A rare Tyrannosaurus Rex skull has been found by a team of paleontologists and volunteers in northern Montana.

The volunteers, Jason Love and Luke Tufts, were searching for dinosaurs when they saw a scattering of bone pieces falling out of a hillside. The bones had trademark honeycomb pattern of a large carnivore and after more digging, it was evident that they were staring at the backside of a cranium from a T. rex, the most iconic of the dinosaur predators.

The organization was managed by paleontologist Greg Wilson with the University of Washington and Burke Museum as part of the Hell Creek Project. This project is abundant in specimens from the late Cretaceous period, near the end of the reign of the dinosaurs. It aims to open the mysteries of history on Earth at that time and place and is very well investigated by experts.

The Tyrannosaurus Rex skull that had laid for 66 million years took a month and dozens of people to remove. They had to remove 20 tons of rock from above the fossil site before delicately mining away around the bone with hand instruments.

The package that was carefully transported to the museum weighs about 2,500 pounds because of the plaster cast that protected the skull.

The Tyrannosaurus Rex is known to have lived to about 25-30 years old and is one of the most iconic dinosaurs.

The skull is about four feet long and during the process of excavation, the team of researchers also found vertebrae, ribs, parts of the hips and pelvis belonging to the same animal. It is considered to be among the 25 best-preserved T. rexes ever found. The entire right side of the cranium has been conserved, including teeth.

The plaster cast including the fossil will be unveiled at the Burke Museum in Seattle from August 20 to October 2. After that, technicians will begin cleaning up the skull so scientists and the public can find out how the giant predators lived, ate, and grew up.

The Tyrannosaurus Rex skull will then go on display at the New Burke Museum when it opens in 2019.

Moreover, in an attempt to teach children more about the Tyrannosaurus Rex, there will soon be a video game for that.