You are here: Home / Tech & Science / Above Traffic Elevated Bus Tested in China 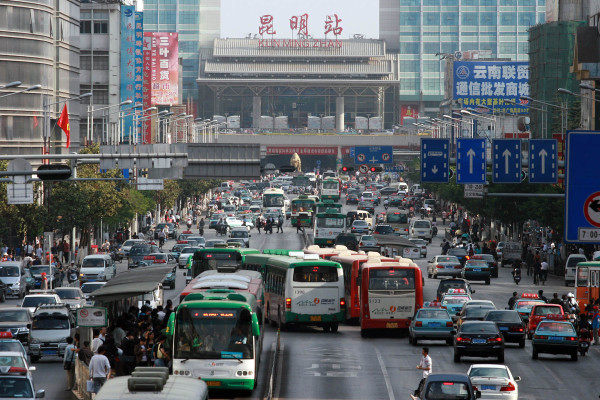 For years, China was playing with the idea of new ways to streamline traffic and now, with this new above traffic elevated bus they seem to have solved the problem.

One compartment of this elevated bus is 4.8 m high, 22 m long and 7.8 m wide and is designed to use regular roads. The biggest impact on traffic is that this innovative, futuristic bus straddles multiple lanes and the cars, thus gliding over traffic not affecting its normal course.

The complete version of the bus will be composed of 4 such compartments attached end-to-end and will be equipped with ramps that will deploy from the sides of the bus allowing passengers to board from street level.

The vehicle will reach speeds up to 60 km/ hour and will be able to fit under other cars or vehicles with a height of maximum 2.1 m.

Several Chinese news agencies posted pictures and videos of the first tests in Qinhuangdao where the elevated bus travel distances of under 300 meters with more than 300 passengers. If testing reveals no problems, the new elevated bus will be able to carry approximately 1200 passengers above the traffic.

According to Tebtech, a company that aided with this innovative idea, the tests from Qinhuangdao were made to evaluate the braking system and the power consumption of the elevated bus.

This innovative approach can prove to be the much-needed solution to the growing problems of traffic congestions that affect not only China’s biggest cities but also other countries.

Considered to be hundreds of millions of dollars cheaper than introducing new elevated trains or subways, adding a fleet of these elevated buses to any crowded city seems to be the best solution. These are very ambitious goals, but it’s just the first step towards accomplishing the dream of streamlining heavy traffic.

While the tests in Qinhuangdao were considered a significant step for the project, they hardly replicate the normal conditions of heavy traffic which is why many other tests must be done before the elevated bus can navigate freely on the busy roadways.