You are here: Home / Tech & Science / A Solar Storm Could Have Triggered World War III 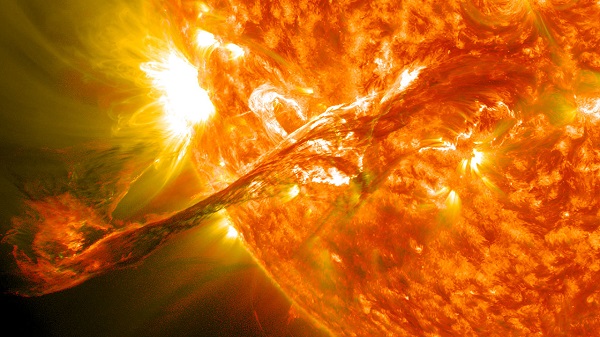 A solar storm could cause considerable damage to our communications.

It seems that a simple solar storm could have triggered World War III if not for a couple of Sun-gazing researchers that were studying the star back in 1967 when communications across the country fell.

A strong solar flare reached our planet on May 23rd, 1967 giving birth to geomagnetic disturbances that caused a massive disruption in radio communication.

Due to the radio black-out and the jammed missile radars, United States officials believed that the interference was the work of the Soviet Union that was preparing itself to launch nuclear missiles in the US.

The United States was close to pushing the start button on the nuclear war, reaching 12 o’clock on the Doomsday Clock. However, weather forecasters affiliated with the US military announced that the disruptions might have been caused by a solar storm.

Thus the panic and confusion that took over the country were cleared, and Russia was not wrongfully accused of attacking the United States, thus triggering World War III.

According to a space physicist from Colorado Boulder University, Delores Knipp:

“Had it not been for the fact that we had invested very early on in solar and geomagnetic storm observations and forecasting, the impact of the storm likely would have been much greater.”

The potential impact of the storm was unknown until last week when Knipp told the story of the solar storm from 1967 during Space Weather.

A solar flare occurs when a sudden release of magnetic energy pierces the atmosphere of the sun. In the case in which an eruption is powerful enough to make the trip, the radiation that reaches our planet is capable of causing severe radio interference, blocking communications and other technologies.

Now, decades after the 1967 incident, solar flares are being studied by government agencies, their role being understood and acknowledged.

Knipp declared that the confusion created by the flare is a perfect example of why the importance of geoscience in space research.

The military branch of the US began monitoring space weather disturbances and solar activity in the upper atmosphere and the planet’s magnetic field during the late 1950s.

During the 1960s, the Air Weather Service, which is a branch of the Air Force started monitoring the sun for intense radiation eruptions and solar flares.