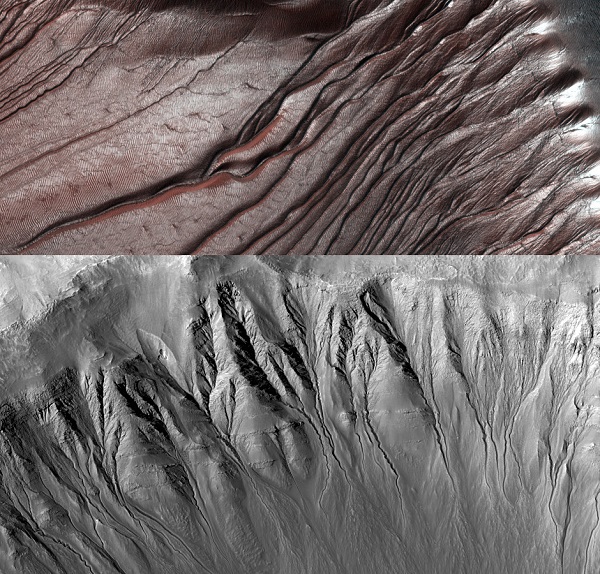 Back in 2000, when NASA scientists found some gullies on Mars’ surface, people everywhere were convinced that they were evidence of flowing water on the Red Planet.

Come 2014, however, and further research proved that the widespread excitement had been undue, as the gullies were more likely formed by the periodical freezing of carbon dioxide.

Two years after that discovery, the data collected by the Mars Reconnaissance Orbiter (MRO) has helped scientists build a case against the theory that said the peculiar structures were caused by flowing liquid water.

A team of researchers at the Johns Hopkins University Applied Physics Laboratory (APL) from Laurel, Maryland, analyzed the high-resolution data collected by the MRO, closely looking at over 100 gully locations throughout Mars.

The results showed no mineralogical proof of water or any of its by-products. A study featured in the Geophysical Research Letters detailed the findings, enabling scientists to become more focused in their theories about the origins of the Martian gullies.

It is noteworthy that the gullies are a different relief structure from the “recurring slope lineae” that was first discovered on the surface of the Red Planet last year.

The RSL – which look like dark lines that accentuate during the warm season and fade away during the colder times of the year – are still believed to have formed, at least in part, by flowing water.

On the other hand, Martian gullies are most visible between 30 and 50 degrees latitude in both hemispheres, and only appear as if they are the result of flowing liquid water.

The similarity between the Martian gullies observed by NASA’s Mars Reconnaissance Orbiter and the gullies we see on Earth is what led some scientists to assume the Martian structures are also carved by liquid water.

However, under further observation, no evidence for alteration by water can be found. For the study, the researchers gathered and revised data captured by the orbiter’s Compact Reconnaissance Imaging Spectrometer for Mars (CRISM) instrument. This allowed the team to analyze the different kinds of minerals present in the gullies.

So, even though there seems to be enough evidence to prove water once flowed on the dry Red Planet, the question of whether it still exists remains yet unresolved.