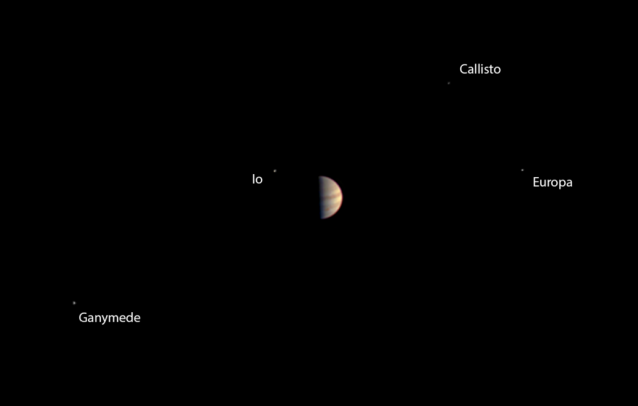 On July 4, NASA’s Juno probe finally reached Jupiter after a 1.8 billion-mile trip, but this week NASA confirmed that its JunoCam is fully operational and has just taken a first picture of the gas giant since the mission started 5 years ago. First high-resolution pictures will be taken and made public within several weeks.

The probe’s camera was turned on about a week after it entered the gas giant’s orbit. Mission team said that the tiny spacecraft made it through the gas giant’s extreme radiation and its scientific tools are intact.

Scott Bolton, senior mission investigator of the Southwest Research Institute in San Antonio, TX, said that the team was eager to see the first closeup of the planet’s poles. The image was taken on July 10 from a 2.7 million mile distance from the planet’s surface.

The probe was reportedly able to capture Jupiter’s atmosphere, the Great Red Spot, and three of its four natural satellites. Researchers said that JunoCam is ready to take more pictures as the probe is traveling along its orbit.

NASA scientists slated the high-resolution photo shoot for August 27, when the probe is close enough to Jupiter. Its visible-light color camera will be able to take high-resolution images of the planet’s turbulent atmosphere and cloud tops.

JunoCam is not considered a science instrument. It was purposely placed on the spacecraft to help the team obtain sharp images of the planet and keep the public engaged. Images will be placed on the mission’s official website, where every space exploration fan can view them.

The team said that Juno is expected to go around the planet about 37 times, and plunge as low as 2,600 miles towards its surface. The probe will be able to analyze the planet’s breath-taking auroras under the thick cloud cover, its magnetosphere and atmosphere.

Juno probe which was named for Jupiter’s wife, the ancient Roman goddess Juno, was launched on August 5, 2011. After a roundabout path to the gas giant of about 1.8 billion miles, it performed a successful orbit insertion on July 4 at 11.38 ET. At about 4:54 BT, the orbit was confirmed on Earth as the probe performed the complex approach procedure on autopilot. Mission team was over-thrilled.

‘We’re there. We’re in orbit. We conquered Jupiter,’

said on that day Bolton.

Bolton added that Juno will soon enable his team to take a closer look at the planet’s atmospheric features and its inner structure. The scientists think that the probe could help humanity finally unlock all secrets of the largest planet in our solar system.