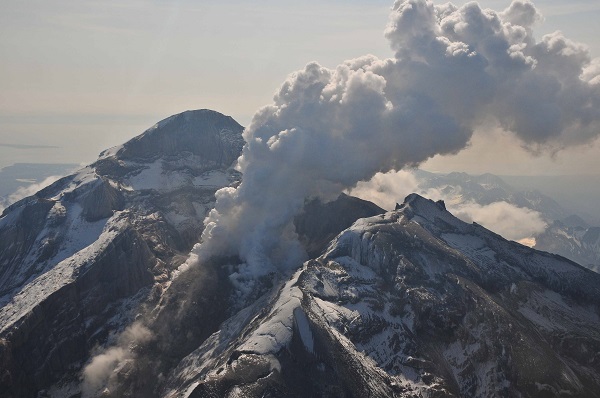 The eruptions of the Alaskan volcano are a spectacle.

Pavlof, one of the volcanoes situated in Alaska is expected to erupt again this month. This would be the third time this year when the Alaskan volcano blows its top. The Alaska Volcano Observatory already raised the alert for any incoming aircraft.

Pavlof is located on the Alaskan Peninsula southwestern end. The mountain is the most active in the region, the Observatory registering more than a dozen eruptions in the past years.

The last two eruptions occurred this year in March and May. Due to the fact that the researchers were able to predict both of them, there were no registered victims in either of the incidents.

“Unrest has returned to Pavlof Volcano this week. In the past 24 hours, seismicity increased and minor steam emissions were observed in the web camera. AVO issued a VAN/VONA this morning raising the Color Code to YELLOW and the Alert Level to ADVISORY.”

According to the scientists that have been studying it for years, Pavlof has an unpredictable character. The volcano is known to sometimes erupt with no warning. Such incidents could prove fatal in the case in which an aircraft was present in the area.

Moreover, it seems that the eruptions are starting to get more and more violent. The previous incident which took place in May this year resulted in a considerable amount of ashfall on the area surrounding the mountain.

The eruption debris covered with ash a nearby village. It also caused a significant delay for a number of flights that were scheduled to pass over the area at the time. The airlines decided to cancel any nearby routes, causing the delay of more than a dozen flights.

The May occurrence was a rare sight, as villagers that live near the volcano were spared of the image of a blanketed village in the last twelve years.

The eruption that took place this March managed to send a 37,000 feet ash cloud into the air. The debris was spread over hundreds of miles.

Pavlof is situated at 625 miles southwest of the town of Anchorage. It would take a much bigger explosion to affect the capital of Alaska.

For the moment, any flight that was scheduled to pass in the vicinity of the Alaskan volcano was either redirected or canceled.