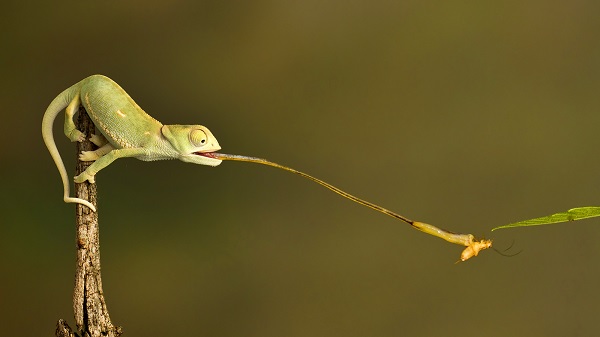 A surprisingly efficient hunter for such a small sized animal, the chameleon has an entire biological arsenal to work with, including panoramic vision, color-changing abilities, and plenty of patience.

But maybe the most impressive of all is that lightning-fast tongue.

Researchers have been extensively analyzing the chameleon’s tongue-lashing prowess, but one ability kept eluding them: how come the chameleon’s prey doesn’t fall off its fleshy projectile when it snaps its tongue back in its mouth at such high speed?

Experts have studied the possibility of several mechanisms that could be at play, such as stickiness, suction, or even a velcro-like bond the chameleon’s rough tongue and the meal.

Fun fact: the chameleon’s prey can weigh a third as much as the predator itself, making the creature the impressive hunter it is. But scientists from France and Belgium have finally got an answer to the mystery: the tongue’s tip is covered in sticky mucus.

“We were surprised to find that the liquid is very viscous, about 1,000 times more so than (human) saliva,” explained Pascal Damman of the University of Mons, Belgium, a co-author on the study featured in the journal Nature Physics.

He added that the thickness – or viscosity – of chameleon spit had never before been a point of interest. With the help of mathematics, the research team was able to calculate the stickiness (adhesive properties) conveyed by such viscosity.

So it turns out that the simplest explanation was the truth: the stickiness is enough to hold the prey in place as the chameleon’s sticky tongue hauls even the bigger meals.

Unlike other reptiles, the chameleon is the “sit-and-wait” predator, hiding instead of scrambling after its lunch; motionless, it waits for its prey to reach within striking distance.

As it becomes one with the background, camouflaging with its color-changing abilities, the chameleon manages to remain silent and motionless due to its independently rotating eyes with a near-360-degree field of vision.

As a meal makes its appearance, the color-shifting lizard shoots its tongue, extending it up to double its body length. When it comes to swallowing the prey, experts suggest the chameleon has to wait until the adhesion wears off naturally.

As the tongue gradually relaxes, the adhesion could similarly loosen and disappear, allowing the chameleon to chomp on – without biting its tongue in the process.
Image Source: National Geographic