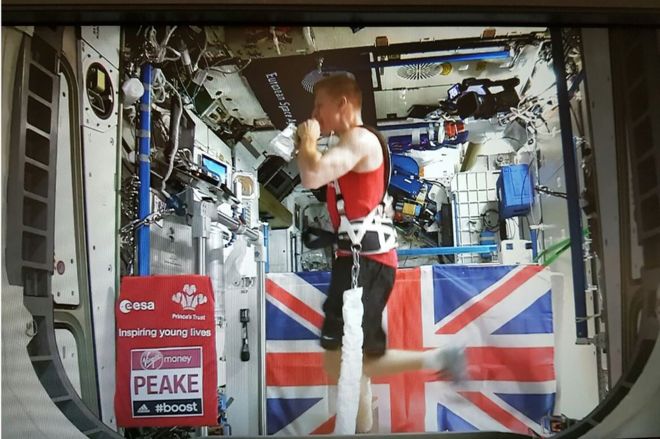 British astronaut Tim Peake has set a new record in the most unusual conditions. He ran the London marathon – completing a total of 26.2 miles – while aboard the International Space Station.

Back on Earth, tens of thousands of runners completed the marathon this past Sunday. And some hundreds of miles – 200 to be more precise – above, Peake joined them in the same feat.

Instead of running on the road, however, Peake used a treadmill in a cramped room with no windows. The 26.2 miles of the London marathon were completed by the astronaut on the International Space Station in exactly 3:35.21, setting the record for a marathon in space.

Because there is no gravity aboard the station, Peake had to be anchored to the treadmill – he used bungee cords and carabiners to harness him so he could run.

However, this record isn’t the first Peake has set, as he is a seasoned marathon runner; back in 1999, he set his first world record on the ground.

This time, technology helped him to run “alongside” everyone else on Earth. Peake used the RunSocial app to follow the same route as them – he ran the digital version.

Meanwhile, other astronauts have completed a marathon in space, so Peake is not the first one to achieve the feat. The first ever was Sunita Williams, who ran in 2007 along with the Boston marathon; she also used a treadmill on the ISS.

In this case (back to Peake), the best time was recorded by Kenyan Eliud Kopchoge, who ran the race in just 2 hours, 3 minutes and 5 seconds – some 8 seconds faster than the previous world record.

The harness that has to be used for running a marathon in space can make things rather difficult and uncomfortable. According to Peake’s trainer, he ran with the weight of approximately 33 pounds on his back; the weight was supposed to keep him ‘grounded.’

However, recovery is rather easy, because Peake’s muscles completely relaxed immediately, as soon as he took off the harness and the bungee cords, which felt wonderful.

Besides the obvious difference in the marathon conditions, Peake also missed the cheering crowds and the friends and family that could have supported him on race day. Also, the sights and the sounds associated with a marathon can be a boost, helping racers finish.

But despite the awful conditions – chaffed hips and shoulders – Peake completed the race, which is a proud moment for any runner.
Image Source: BBC News