You are here: Home / Technology / From Star Wars to Real Life: Microsoft Shows Off Holoportation 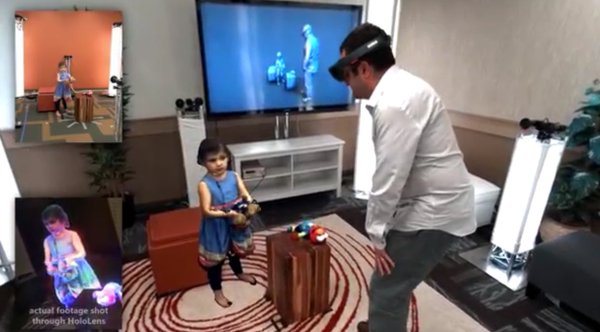 Over the past year, Microsoft kept on unveiling concept projects for HoloLens, but “Holoportation” might be the crown jewel for its $3,000 augmented reality headset.

Microsoft Research’s latest demonstration has left people in awe while also giving them a familiar feeling. The media has already given the verdict: it’s something very akin to the science-fiction phenomena seen in Star Wars.

Holoportation is new ability that allows the headset wearer to view a live hologram of a person who’s not in the same room. At this point, a large part of the equipment is supposed to work together to transfer the hologram communication into the real world.

When projecting someone in real-time, the tech must be able to capture the person from all angles with several 3D cameras. Their speech and movement also needs to be recorded so that the interaction can be a two-way communication.

This 3D image is then sent to the HoloLens headgear, where the wearer can see the hologram projected in the same room with them. But there are some limitations, such as the narrow field-of-view of the HoloLens.

In the demo video, it looks like two people are in the same room, but looking through the headset, the hologram might disappear if you turn your head to one side.

There are a lot of applications for the holoportation, in addition to being used as a techie, long-distance communication.

For example, it can be recorded and the receiver can later play it back and interact with it. Demos showed the person’s hologram can also be shrunk down in size and placed on various surfaces.

But before you start fantasizing about having Star Wars-like conversations with your buddies, you must keep in mind that this type of technology is clearly in its very early developmental phase. It will be long before holoportation makes its way to consumers.

The creators have a lot of bug fixes to implement, as the holograms presented in the demos sometimes failed to track motion properly and were flickery.

But even at this stage, Microsoft’s determination to advance augmented and virtual reality is already starting to pay off. As the company’s Build 2016 developer conference will be kicked off on Wednesday this week, people are getting ready to be even more impressed.

The first dev edition of the HoloLens will also be ready for shipping soon. Microsoft has kept silent about the possibility of creating and releasing a consumer version, but we will probably know more about the AR heads after the conference.
Image Source: PBS