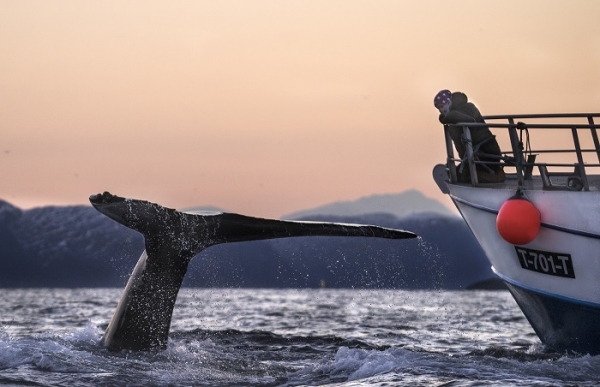 The Omura’s whales are an amazing sight to behold, albeit rare as it is. But thanks to researchers observing the fairly unknown Omura’s whales, the public has seen some exciting new findings.

Dr. Salvatore Cerchio, a marine mammal biologist at the New England Aquarium, and his team were studying the elusive whale species near Nosy Be, a tiny island off the coast of Madagascar.

They managed to strike gold this week by releasing a nearly two-minute video of the mysterious ocean creatures in the wild. Dr. Cerchio posted the video to the Aquarium’s website.

This is the second video posted by Cerchio and his team of international biologists, and we can see the Omura’s whales swimming smoothly near the surface then disappearing into the deep, turquoise waters.

The subjects are mother and a calf whale pairs and they’re seen doing what they do best: expanding their throat pleats so they can eat krill. According to a statement from the Aquarium, the whales in the species also have distinct markings and colorations.

Unlike the Bryde’s whales – which are often confused for Omura’s whales – the Omura’s whales have “a white lower right jaw, a dark lower left jaw, and a white wash of pigmentation on the right side of their bodies.”

Experts know very little about this particular species of whales; they don’t even know how many of their numbers are alive today. Back in October, Dr. Cerchio published the first-ever video of the whales, which he filmed during an expedition in 2013 near the same island.

With the video, the biologist also released a study of the whales, which was featured in the journal Royal Society Open Science. The study is thought to include the first confirmed pictures and field observations of the Omura’s whales in their natural habitat.

A month after he released the video, Cerchio and his team of biologists went back to Madagascar to continue their research; this is when the latest footage was filmed.

According to the Aquarium, Cerchio has been observing marine mammals living near Madagascar since 2004, but these two past trips were “a whale jackpot.” Never before have the Omura’s whales been seen in such record numbers.

On his latest trip, Cerchio saw nearly twice as many Omura’s whales than all of his previous trips combined. He hopes to return to Madagascar in May, as his research was and continues to be funded by the US Marine Mammal Commission.