You are here: Home / Tech & Science / New Octopus-inspired Skin Can Stretch Under Pressure 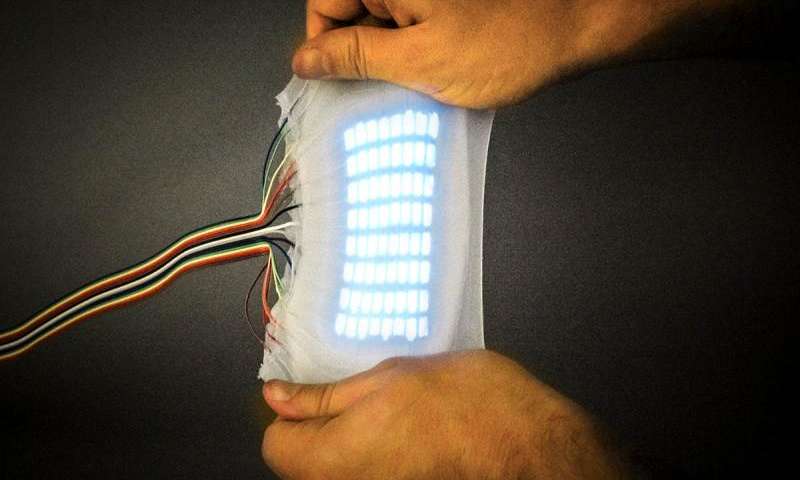 Pressure is not something electronics handle well, and even wearable tech has yet to develop a way to respond when stretched to 500 percent of its original size.

However, Cornell University researchers have managed to create a new, cell phone-sized artificial skin that can stretch when it’s pressurized, and also glow brighter. Chris Larson, a doctoral fellow, and researcher in Cornell’s Organic Robotics Lab, compared the texture of the skin with a balloon or a rubber band.

Some have compared the new technology with octopus skin, which is known for its exceptional elasticity under pressure, but Larson says the cutting-edge tech has surpassed its inspiration.

The fascinating findings were described in the journal Science on Thursday. The team was inspired by the octopus beak which can move and stretch to surprising lengths.

Following the biology principle, researchers created a balloon that bends under pressure. During tests, the team set an unyielding carbon fiber on the bottom and looked at the free top to see the reaction to the pressure from both within and without.

According to the American Association for the Advancement of Science, the result was “a three-chamber robot with the newly developed ‘skin’ layers on top and inflatable layers below that allow movement.”

Due to the linear expansion of the chambers, the robot is able to move forward in a worm-like fashion. It’s not the first time, however, when someone invents such electronic skin. Others have developed skins that can sense pressure and respond accordingly.

This is, however, the first time a team was able to embed electronics, as previous attempts would break when stretched. The Cornell University researchers found a solution by using a hyperelastic light-emitting capacitor (HLEC).

Larson explained the system they created can sense pressure like the other skins before it, but it can also emit light, which makes it even more similar to that of an octopus. As the robot dressed with the artificial skin moves forward, the glow gets even brighter.

At the same time, the skin’s embedded electric field can glow in various colors, depending on the metal powders chosen for the mix. The team sees potential applications in industry, where humans and robots are already working together.

But before dreaming of long-term applications, researchers have already speculated about the effects in the near future. They have already talked with several automobile companies about incorporating a light-emitting “button” in the dashboard to replace touch-screen interfaces.
Image Source: Phys.org