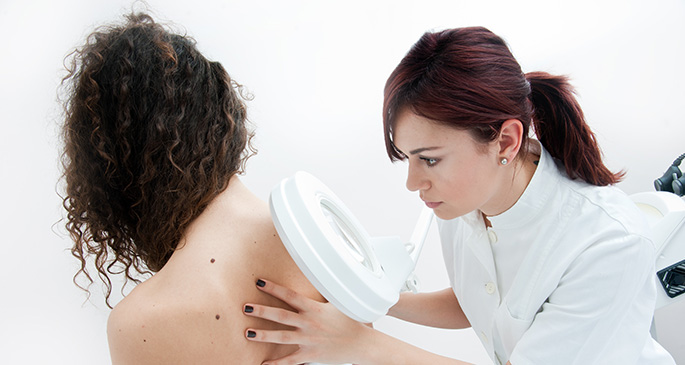 People often believe that a person with many moles is at higher risk of developing skin cancer. The opposite also seems to be widely accepted: if you have normal, smooth skin, there’s no reason for you to get screened for skin cancer.

But, according to a new study featured in JAMA Dermatology, that’s far from true. Researchers have found that most people with melanoma – the most severe type of skin cancer – do not, in fact, have that many moles on their body.

The study’s principal researcher, Alan Charles Geller of the Harvard T.H. Chan School of Public Health, said that a lot of people think melanoma is “primarily a disease of very mole-y people or people with lots of unusual moles.”

That’s what makes the main takeaway of the study of even more importance: the fact that that doesn’t seem to be the case. For the study, 566 people who were recently diagnosed with melanoma in Michigan and California were examined.

After counting their moles and marking the ones that look particularly unusual, doctors found a surprising statistic. Roughly 66 percent of people presented anywhere between 0 to 20 moles, which is considered rather small among physicians.

Geller said the discovery was striking. As people aged, the trend grew even more pronounced, meaning that among people 60 years and older, only 19 percent had 20 or more moles.

According to previous research conducted by Geller, older white men had more odds of developing melanoma than other demographic groups.

Another common misconception was debunked by this study when researchers found that approximately 70 percent of the participants did not present unusual moles at all. In general, unusual moles are characterized by irregular borders, asymmetry, multiple colors and a size wider than a pencil’s eraser.

However, the researchers pointed out that it doesn’t mean that moles are meaningless. Their presence is still considered to be a risk factor for melanoma, but the new study showed that not all moles are telltale signs; only the more unusual moles indicate a greater likelihood of a melanoma prognosis.

In the end, the study means to send a different public health message: the fact that you don’t present many skin moles does not mean you shouldn’t get a skin cancer screening. Geller emphasized that more people should have their skin checked, regardless of the number of moles they have.

He encouraged people to talk to their doctors, because they will “be much more likely to do something for you if you ask.”
Image Source: Doctors’ Approach