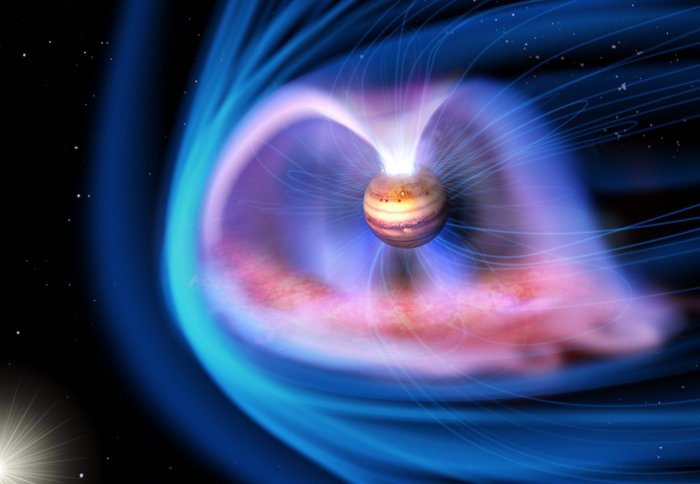 Back in 2011, astronomers observed a huge burst of plasma expelled from the sun crashing into Jupiter, resulting in giant and colorful auroras on the planet.

These auroras were the first time researchers were able to observe directly how solar storms can trigger X-ray auroras on Jupiter. According to the data, this phenomenon was eight times brighter than the usual auroras surrounding the planet.

A new study featured in the Journal of Geophysical Research – Space Physics explains how wind coming from the sun disturbs Jupiter’s magnetosphere as it smashes into the planet.

New observations found that such a disturbance has a great effect on Jupiter’s auroras, so studying them will allow scientists to know more about how the sun interacts indirectly with the largest planet in the solar system.

Astronomers are aware of Jupiter’s auroras thanks to the Chandra X-ray Observatory, a telescope that scans the universe with X-ray, not visible light. These observations scientists made with the help of Chandra were made over the course of 11 hours back in October 2011.

Based on the data it collected, scientists then built a 3D model that highlighted the X-ray emissions. While they were observed only in X-ray, these auroras might be strong enough to be seen in visible light, given the right conditions.

According to John Clarke, a scientist who wasn’t involved in this study, “X-ray auroras would also emit at other wavelengths.”

The auroras we have on Earth – also known as the northern or southern lights – are also caused by sun particles smashing into the planet’s magnetic field. As they are pulled toward the planet’s poles, some of these particles reach the upper atmosphere, where they cause neutral particles to glow in red, greens, and purples.

But the auroras on Jupiter aren’t just caused by the sun. Astronomer Tom Cravens, who also didn’t participate in the study, explains that solar activity is not responsible for “the main Jovian aurora, at lower latitudes, and mainly ultraviolet.”

The cause for those auroras is Jupiter’s rotation and the fact that the magnetospheric plasma moves in line with this rotation. This discovery will also help the scientific team working on the Juno spacecraft, which should reach Jupiter in July this year.

Juno is mainly designed to collect more data about the interaction between the sun and Jupiter, so it’s essential that we know more about how solar storms disrupt the planet’s magnetosphere.
Image Source: Imperial