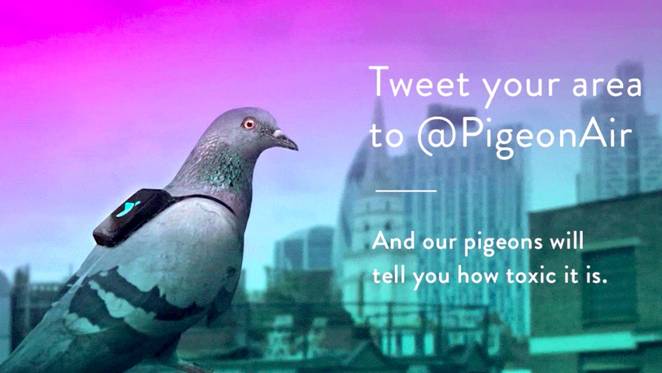 How dirty is London’s air? Thanks to a flock of racing pigeons fitted with tiny pollution sensor, the dwellers of the British capital can now be more aware of the worrying trends.

It was time Twitter was returned to their real owner: the birds. Besides the pollution sensor, the ‘pigeon air patrol’ also has a Twitter account, part a publicity stunt on that aims to highlight London’s air quality problem.

After being driven away from Trafalgar Square for becoming a risk to public health, pigeons could now help Londoners with one of their biggest health concerns: the ever-rising illegal levels of air pollution. Thousands of deaths a year are seemingly caused by this very real problem.

On Monday, pigeon fancier Brian Woodhouse released half a dozen racing pigeons from a rooftop in Brick Lane. One of them carried a pollution sensor on its back, and another one a GPS tracker.

The 25g sensor is indeed functional and records the nitrogen dioxide created by the city’s buses, diesel cars, and trucks, and anyone following the pigeons’ account ca get a reading of the situation.

However, the real purpose of the birds is to raise awareness. Pierre Duquesnoy, whose idea won him last year’s London Design Festival award, said the “health and environmental scandal” must be stopped. “We’re making the invisible visible,” he said.

The reality is that even though people often associate air pollution with Beijing and other big cities, London has been high up in the top on some days in the year.

Using the pigeons for raising awareness is a method Duquesnoy borrowed from the first and second world wars when the birds were delivering information and saving lives. Flying relatively low, at 100-150ft, the pigeons can reach fast speeds up to 80mph.

Duquesnoy also thought it was interesting to take what is seen as a flying health risk and transform it into something entirely positive. Duquesnoy is the creative director at marketing agency DigitasLBI.

Releasing the Air Patrol Pigeons for the first three days this week was caused by the rising of air pollution from moderate to high levels, affecting humans and pigeons alike. According to Battersea recording, the levels have reached ‘very high’, the top of the scale.

Much of the city is affected by these adverse changes, but London is not the only region in the UK that deals with pollution problems. In urban areas in northern England and Scotland, Stockton-on-tees and Middlesbrough also recorded high pollution readings.
Image Source: Tree Hugger