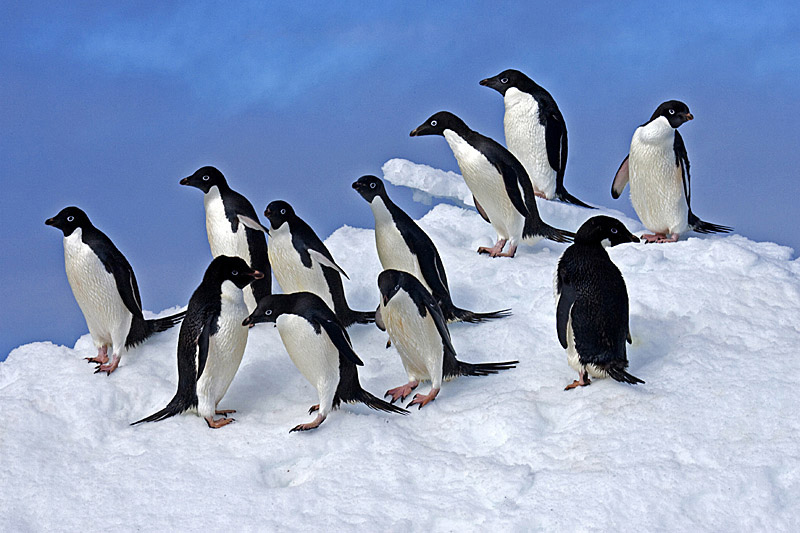 Rising sea levels are not the only problem that penguins off the coast of Antarctica have to deal with. Ever since a large iceberg became lodged six years ago, roughly 150,000 penguins have died because their food supply was cut off.

According to the journal Antarctic Science, the B09B iceberg is quite large as it started combining with expanding ice; it now measures more than 1,120 square miles – nearly as vast as Rhode Island.

In its path, the iceberg has left a community of Adelie penguins stranded, with no food supply and with a drastically different landscape, as described in a report published by Cambridge University Press in the peer-reviewed journal.

It was back in 2010 when this gigantic mass of water ice first collided with the penguins’ habitat of Cape Denison in Commonwealth Bay. Before running aground the bay, the iceberg had been floating along the coast for almost 20 years.

Basically, the ice mountain has landlocked the penguins, which means they have to travel nearly 40 miles across a desolate stretch to find any food. These terrible conditions have caused a dramatic drop of members in the colony: the once 160,000-strong colony is now down to merely 10,000 penguins.

Researchers explained that ever since the iceberg B09B has crashed into the Commonwealth Bay, East Antarctica, the distance that the Adélie penguins must cover to find food has “dramatically increased.”

The Climate Change Research Center at Australia’s University of New South Wales reported that the colony has suffered a great loss in numbers since 2011, and the future prospects don’t look any better.

If the colossal iceberg won’t be broken up by sea ice – which is less likely, considering its sheer size – the colony is bound to disappear in 20 years. There are less than 5,500 pairs still breeding in Cape Denison, as the penguin community suffered a great decline in population.

But luckily, this disaster won’t be the end of all Adélie penguins. Just five miles away from the Commonwealth Bay, another colony is doing a lot better.

This group is actually thriving, which led the scientists to conclude that the iceberg only represents a danger for the species that is now landlocked. East Antarctica is home to about 30 percent of all the Adélie penguin population.

Scientists have concluded that over the last millennium, deglaciation – the increasing melting of glaciers – has played a significant role in the Adélie penguins’ population.

But even though changes in sea ice are indeed contributing to the species’ demise, it’s important to keep in mind how the penguins’ population has varied over a larger time frame.
Image Source: Travel Wild