You are here: Home / Tech & Science / Current Scenario Off the Coast of Florida: Thousands of Sharks Migrating 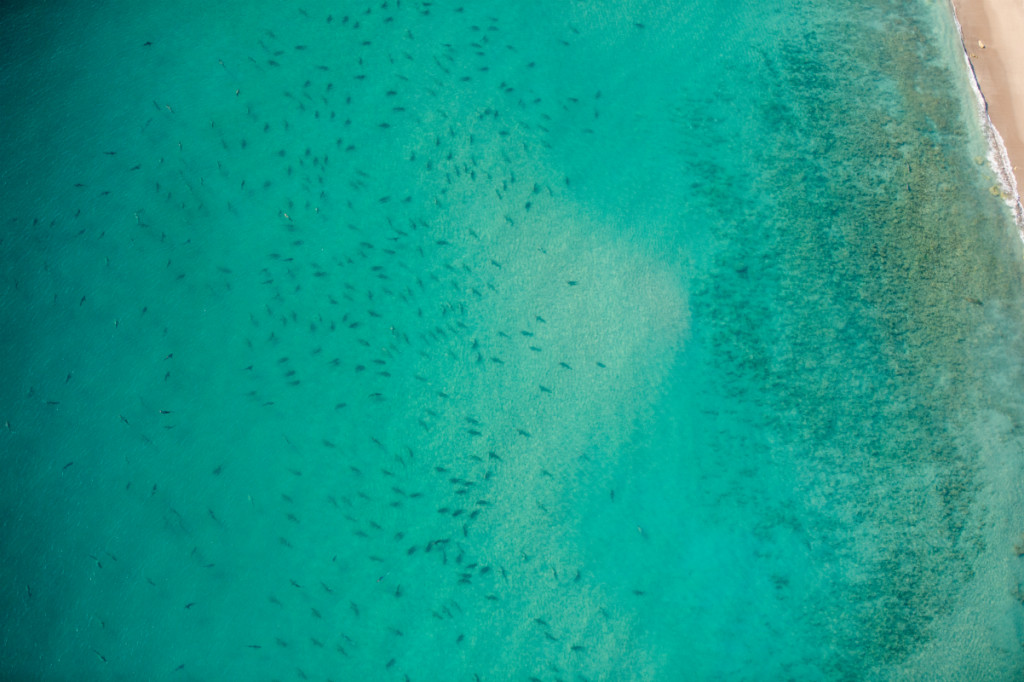 The marine beasts you see in the picture (above) have been caught on camera during migration. Since they don’t like swimming in cold waters, these sharks wander to warmer temperatures every winter.

Even though this image depicts the current scenario off the coast of Florida, the beachgoers there haven’t let the sharks complicate their beach plans – they still swim, boat and paddle as during any other time.

But all the people feeling an irrational fear of sharks right about now should get their facts straight. Despite the fact that the recently surfaced images looked like they’ve been snapped during the filming of the new “Jaws,” these marine creatures aren’t in fact so bad.

Averaging at about six feet in length, the blacktip sharks are actually on the “near-threatened” list, according to the International Union for Conservation of Nature and Natural Resources. In general, they tend to stay clear of people.

Surprisingly, this type of shark is rather “skittish,” as described by Stephen Kajiura, an associate professor with the Florida Atlantic University. Kajiura’s team is now working on tagging the marine animals in order to gain a better understanding of how they migrate across open waters.

You should be happy to hear that a blacktip shark has never been reported to kill anyone. Luckily, they do their thing, and we do ours, peacefully. But even though the sharks are not that scary in themselves, their new migration patterns show that the terrifying climate change has left its imprint here, as well.

Kajiura explains that the sharks’ normal route would take them a bit farther south, toward Miami, but this year they seem to prefer the temperatures located near neighboring Fort Lauderdale.

It’s a known fact by now that climate change is responsible with dramatically altering the way our oceans look and the life living in them. Researchers suggest that increasingly higher temperatures might make our oceans unrecognizable by the end of this century, that is, unless carbon emissions will soon lower drastically.

But there’s hope: thanks to the fact that the world in general and major carbon offenders in particular have started taking climate change more seriously, sharks (and people) might get some good news in the near future.

At the end of 2015, a United Nations summit in Paris kicked off some ambitious goals regarding the reduction of our reliance on fossil fuels. We should focus more on keeping this Earth as green as long as we can before the sharks’ home will not be the only one hanging in the balance.
Image Source: Live Science