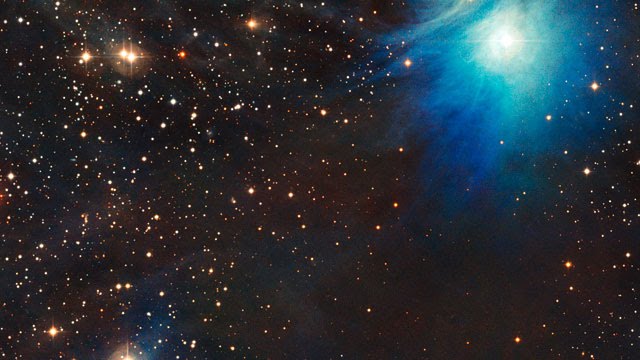 We humans cannot help but marvel at the stars covering the night sky, and we love them from the safe distance of a few hundred light years away. Their birth, evolution, and death have always been an interest point for scientists and astronomers.

But sometimes, stars can also capture the attention of regular humans like you and me, particularly when they show off a stunningly beautiful light show. Such is the case of a shiny newborn star bathing in its nebula’s blue light.

Scientifically identified as HD 97300, the star is some 500 light-years away from our planet, and can be seen in the southern constellation of Chamaeleon Complex. According to astronomers observing the constellation, the nebula in which the star is being shaped has topped all the other complex stellar nurseries in terms of brightness.

The beautiful light emitted from the nebula is caused by the high-frequency energy generated by the young stars enclosed within the cloud. Dark and dense clouds surround the nebula from all sides, which means starlight is unable to penetrate through their masses.

In the center, there’s a bright star of the youngest type of stellar bodies out there – a T Tauri star that can be detected in visible wavelengths. This kind of stars has more mass than they will have during most of their lives, as they have yet to start fusing hydrogen into helium.

On the other hand, they produce more energy from the contraction of their masses, because gas is absorbed into the quickly-destroying stellar body. According to the astronomers at the European Southern Observatory (ESO), this is the explanation why such stars are a lot brighter:

“These fledging stars already have surface temperatures similar to their main sequence phase and accordingly, because T Tauri-phase objects are essentially jumbo versions of their later selves, they look brighter in their oversized youth than in maturity.”

During this process, the light generated by the newborn stars gets scattered in the surrounding gas. Some of this light is reflected to Earth, where astronomers see it as a reflection nebula. The new picture we have of the HD 97300 star illustrates the stellar process and was captured with the MPG/ESO 86-inch telescope in Chile.

When a star emits more energetic light – such as the UV radiation that comes from very hot new stars – the starlight has the ability to ionize nearby gas, which makes it emit light of its own. However, HD 97300 is nowhere near that powerful, so its destiny is to die sooner rather than later.
Image Source: YouTube