You are here: Home / Tech & Science / Alien World is Now a Little Less So With New Mars Map 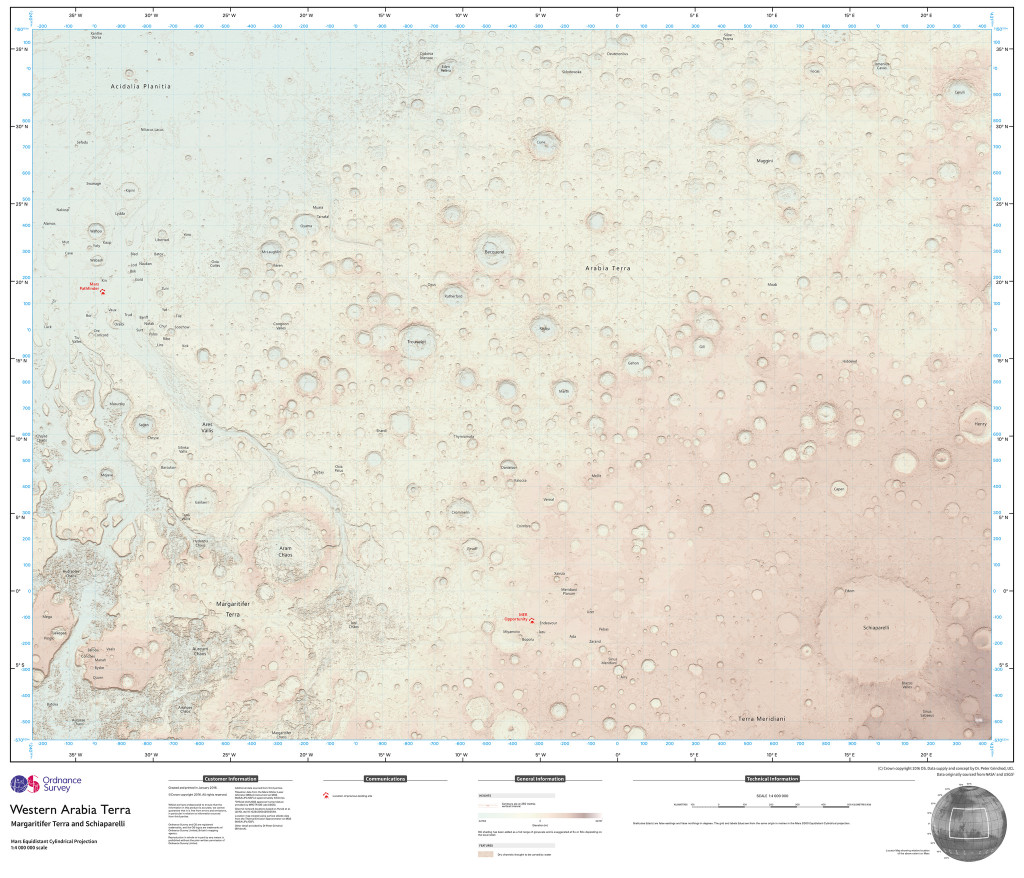 It’s an eerie experience seeing the planet Mars mapped not in an astronomical way, but in the style traditionally used to represent the Earth. Thanks to British cartographers at the mapping agency Ordnance Survey, the alien world is now a little less so.

It looks less like a distant landscape on a planet that’s 34 million miles away from us and more like a place you would like to visit on an afternoon hike. OS designer Chris Wesson explained his desire towards applying the old mapping technique on Mars in a blog post.

Even though planetary maps can be visually very appealing, “they do often seem to be, as is their inherent nature, very scientific and unnatural in their presentation.” That’s why the team set out to start treating Mars like any other Earth-based landscape.

Wesson says there are few key elements to adjusting any kind of map to have an Earthy feel; you need to use a soft color palate, with brown-orange contours. A legend in one of the map’s corners and cyan grid lines cannot be missing.

He adds that even adding titles and scale bars can give the map a less space-out feeling. Mars’ map the team comprised uses a scale of 1:4,000,000), and some super-saturated red have been used for its design.

As Wesson explained in his blog post, he felt compelled to keep the shades normally associated with the Red Planet, with the occasional extra color or two to put emphasis on terrain variation.

While researching the open-source NASA data which was used to create the map, Wesson found that the Martian surface was a great challenge. “Mars is a very different topography to the Earth to map,” he said.

Even though a close-up would show a very bumpy surface, translating those craters and valleys to such a large scale meant the map consisted of many “vast expanses of land that appeared flat.”

In order to give the map more personality, Wesson’s team turned to surface exaggerations and different lighting. But this Martian map is supposed to be more than just for fun: the idea is to design such maps that could help astronauts when (if?) they will actually reach the surface of Mars.

NASA hopes that humans will reach Mars by the 2030s, and if they succeed, it will be the first time we’ve reached other celestial bodies on foot since the moon landings.
Image Source: Flickr