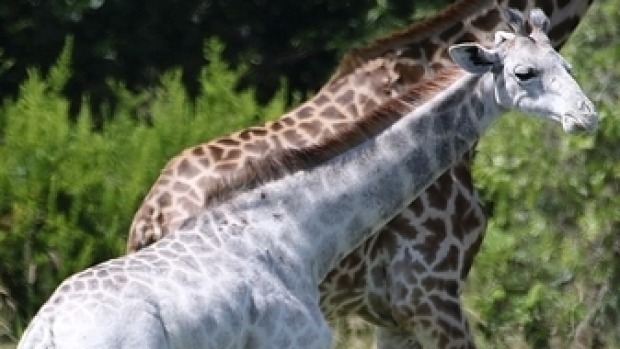 Omo the giraffe is only 15 months old, but she has already achieved a major feat: surprisingly, she’s still alive. Being easy targets for hyenas and lions, almost half of giraffe babies don’t make it in their first year.

But Omo isn’t threatened only by animal predators, because she is a rare white giraffe, which means poachers are also highly interested in hunting her. Due to her diagnosis of leucism, Omo’s skin cells are unable to produce pigmentation.

Leucism has left much of her face and torso in the color of a ghostly white – shockingly paired with a red mane in a very David Bowie-like fashion. Believe it or not, Omo’s name comes from the popular laundry detergent, and she lives in the Tarangire National Park in Tanzania.

According to local scientists, Omo is the only the second white giraffe spotted in over 20 years. The park offers protection to about 3,000 giraffes, as they are the object of increasing poaching activities.

The Wild Nature Institute (WNI) posted Omo’s first picture in April 2015, and they offered an update last week. Fortunately, they are “thrilled that she is still alive and well.”

At first glance, Omo looks like an albino, but there’s a difference between albinism and leucism. Animals with albinism cannot produce melanin – that’s just one pigment – while animals with leucism are missing a lot more.

The quickest way to spot the difference is to look at the eyes: albinos’ eyes are usually red, but leucistic animals’ eyes don’t change their normal hue. Even though it affects a number of species, leucistic individuals aren’t always white; hippos with leucism, for example, are a flecked pink.

According to Derek Lee, founder of the WNI, Omo’s unusual coloring had turned her into more of a poaching target. A lot of traditional crafts use the giraffes’ durable hide, and the poaching problem has worsened with the growth of the tourist souvenir market.

According to the Rothschild’s Giraffe Project, which has focused on studying the animals’ behavior, the giraffes are even easier to hunt because they are calm and they don’t run off immediately. Their bushmeat is also desirable, and a single specimen can bring in a huge amount of meat.

Giraffes are also an endangered species due to rumors that their brains and bone marrow hold the cure for AIDS/HIV patients. These reports began circulating in Tanzania over a decade ago, making the species’ survival even more difficult.
Image Source: Stuff